Bethel's Wong is Times-Herald Female Athlete of the Year 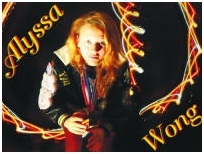 Bethel High School's Alyssa Wong was a Sac-Joaquin Section Masters champion, a state qualifier and eventually an All-American during her junior season for the Jaguars. (Chris Riley/Times-Herald)

When Alyssa Wong was asked during a sixth-grade physical education class if she wanted to try wrestling, she had no idea how far it would take her.

"Wrestling-wise, as a sixth-grader, she didn't light up the world, but she was very solid," he recalls. "By seventh grade, she was phenomenal."

Wong was 27-2 as a seventh-grader with one of those losses coming at the Northern California finals and the other at state. As an eighth-grader, she was 32-1 and won the state championship in her weight class.

"She never got rattled," Guiducci said. "She's just very calm out there. Some wrestlers will get hyper before a match but that was never Alyssa. In the late rounds, she would always turn it on."

Wong used that same demeanor as a junior at Bethel High School this past school year. She was a Sac-Joaquin Section Masters champion, a third-place finisher in the state tournament, a champion at the California Junior Freestyle Championships in Visalia and third at the Folkstyle National Wrestling Championships in Oklahoma City, Okla.

She is the Times-Herald Female Athlete of the Year.

Bethel wrestling coach Mike Sariano also coaches wrestling at Franklin Middle School but didn't get a first impression of Wong until she came to the Jaguars as a freshman.

"I knew right away that she was very tough  and very motivated," Sariano said. "I could tell that she really enjoyed the sport. I knew that some good things could happen to her if she worked and practiced hard all season."

Wong wasn't an instant star at Bethel. In fact, during her sophomore year, senior Alice Hoover and then-sophomore Annibelle Molina were the two stars of the team.

"Alyssa definitely worked harder during the offseason to get herself better," Sariano said. "She wanted to place at state and wanted to get better."

Her mother Cora recalls that after Alyssa finished sixth at state as a sophomore, the family talked about how she could improve.

"The girls who finished ahead of her wrestled year-around," she said. "We asked her, 'Do you want to be one of the elite ones or just be one of the good ones?'"

Alyssa acknowledged she changed the way she thought about the sport.

"It was definitely a big decision," she said. "It became more of a lifestyle."

Cora rarely misses a match. She estimated that she probably went to every wrestling event but one this past year.

"I think she likes me there," Cora said. "I asked her one time if we came too much and she said, 'I think I like having you here.'"

Even though Alyssa is generally low-key, Sariano said he expects her to be even more of a leader her senior season.

"That's definitely something I want to do, but I will be a little nervous as far as the way the other wrestlers perceive me," she said.

Bethel featured 18 female wrestlers this season, by far the most in the area and one of the largest contingents in the state. It was no surprise that the Jaguars finished second to just West Covina at the state meet.

Many of those wrestlers were part of Springstowne's run of six straight state championships. Wong's sixth-grade class was actually the first.

It is Wong's goal to wrestle in a college program after her senior season at Bethel. Cora said Oklahoma City University has expressed the most interest but they want to see how she fares at the Freestyle ASICS/Vaughan Junior and Cadet National Championships at the Fargodome in North Dakota later this month.

Wong is traveling with her club, Sacramento Area Wrestling Association. She's been living at her coach's house in Elk Grove during the week and coming back to Vallejo on the weekends. She expects to wrestle in front of college coaches.

"It's definitely the biggest tournament as far as coaches looking at you for college scholarships," Alyssa said.

Guiducci said no Springstowne wrestler, boy or girl, has ever received a wrestling scholarship, so Wong would be the first.

"We've had hundreds of wrestlers go through our program but no one has signed one yet. There aren't too many out there," he said. "For girls, it's still a growing sport and there are more and more every year."

But first Wong would also like to duplicate what only one Bethel wrestler has done in school history -- win a state championship.

Maribeth Grim won the 100-pound title in 2003 as a junior at Bethel. She went on to win Times-Herald Female Athlete of the Year, much like Wong.

"She was one of the first two girls we ever had," Guiducci said. "There were no other girls at the city level so she wrestled against boys. It really made us give a concerted effort to find more girls who could wrestle."

Guiducci said Wong has already made a difference for his program.