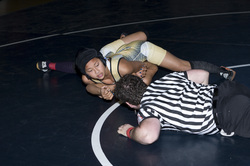 Bethel High's wrestling team edged out some familiar competition and placed first in the Sac-Joaquin Section Girls Masters tournament on Saturday. Hogan was close behind in second place, however, buoyed by Jamilla Woodfork and Chantel White.

"The girls wrestled well today," said Bethel coach Mike Sariano. "They worked hard to get to this point."

Woodfork outscored Bayongan 8-1 in the final at 138 pounds to earn her first Masters crown. Woodfork lost to Bayongan earlier in the season and described the Bethel wrestler as her "main competition. I was focused on winning against her," said Woodfork, a senior at Hogan who began wrestling just this season.

White, who dropped down from 165 pounds to 154, won all her matches during the weekend by pinfall.

"I wanted to pin everyone," the Hogan junior said. "Coach Ric Manibusan said he knew I was ready for this all year. That  made me want it even more."