Bethel girls are 'Masters' of the Sac-Joaquin Section 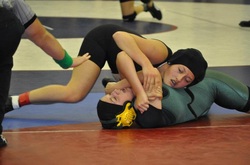 The Bethel High School girls wrestling team let the Sac-Joaquin Section know who the most complete team was at the Masters tournament at McNair High on Saturday.

The Jaguars qualified 11 wrestlers to the state tournament and won the team title with 247.5 points over second-place Lindhurst (132) and third-place Vallejo High (93).

For the third straight year, Bethel has qualified at least 10 wrestlers for the state tournament and are looking to win its first state championship at the CIF Girls Wrestling State Invitational at Lemore High school on the weekend of Feb. 23 and Feb. 24.

"We have another year of experience and with our incoming freshman, we feel really good about our chances," said Bethel head wrestling coach Mike Sariano. "Our goal is go out there and win state."

Freshman grappler Ricki Liang turned in a stand-out performance winning the 114-pound title in her first year at the Masters tournament. Liang beat a pair of upper-classmen including Vallejo High's Veronica Chong in the finals.

"(Ricki) worked hard to get to where she is," Sariano said. "She constantly wants to learn and get better."

Asia Arutia (146) placed third followed by Annabelle Molina (108) and Desire Espena (118) placing fourth in their respective weight classes. This will be Molina's first time qualifying for the Masters tournament.

"We have a solid group of seniors that's been together for the last four years," Sariano said. "They worked really hard."

Among the other placers for Bethel were Kim Pascua (98) and Jeraleen Cimarra (165) in second. Suliana Santos (heavyweight) placed third. Camille Contawe (126) and Amanda Avelino (154) placed fourth.

Vallejo High finished in third place in the tournament thanks to strong wrestling from Veronica Chong and Keira Allison, who both fell in overtime in the finals.

Katrina Abueg, Celina Toves and Jessica Chen all finished in fifth place for the Apaches.

"I was very proud of the girls today," Vallejo head coach Jason Ochs said. "To come in third place is huge, especially considering the fact that we put up better results than schools with more wrestlers than we have. We're peaking at the right time and it's been really fun to watch the girls lately."