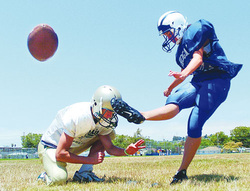 "Crash" Davis was the tough-minded, witty and articulate, but often cynical, catcher in "Bull Durham."

Remove the cynical trait and you have the city of Vallejo's version of "Crash," Hogan High School graduate Carrie Armijo.

Armijo will don her football uniform for the final time on Saturday at the 38th Annual East-West High School All-Star Football Classic, comprised of graduated seniors from the area.

She'll kick for the West team, which is trying to win for the first time since 2006.

Hogan coach Tracy Green, who is heading the West squad, was initially reluctant to let Armijo kick because he was afraid she might get hurt.

But he turned to her Week 4 against McClymonds and she made her first extra points a week later against Rodriguez.

Her parents weren't thrilled by the idea at first either.

"My mom was totally against it," Armijo said. "My dad didn't like it either but once he saw how excited I was, he couldn't resist."

Armijo said she got hit during one of the PAT attempts against Rodriguez and got "smoked" in a kickoff return against Vanden. But that was after she made a key block.

She would dress in the locker room once the boys finished or she would use the coaches' room once it was empty.

Green is one of the most intense motivators around, but that never seemed to bother Armijo.

"My softball coach, David Salais, is the same way, so I'm pretty  used to it," she said. "Coach Salais would yell at me, but he knew I could handle it. He knew it wouldn't make me cry."

Armijo is known more for her catching skills. She developed the "Crash" nickname when she was 8 years old. It wasn't necessarily from being knocked into while behind the plate, however.

"No, I was just doing a lot of stupid things," she admitted.

The Spartans softball team didn't contend for the Sac-Joaquin Section Playoffs her senior season but Hogan played rival Vallejo for 13 scoreless innings before the Apaches scratched home a run in the 14th. The two teams ended up finishing tied in a second game, a contest that ultimately pushed Vallejo out of playoff contention.

Armijo was behind the plate for every inning of those games, catching ace Courtney Williams.

"Her sophomore year, we really bonded," she said. "We got really close, so it's too bad I won't get to catch her anymore."

Armijo is playing this summer for the Vallejo Hurricanes' 18-and-under team and trying to perfect her skills behind the plate while experimenting with switch hitting, something Hurricanes coach John Ramirez suggested last summer.

"From the right side, I have more power, but from the left side I can really use my speed," she said.

She plans to attend Solano College in the fall and major in kinesiology and hopes to one day become a sports trainer. She'll play softball for the Falcons in the spring.

Notes: Gates open at 6 p.m. Tickets are $10 and can be purchased at the Vallejo PAL Office, 301 Wallace Ave. The game features more than 70 players from 22 different high schools. That includes 11 from Benicia, nine from Hogan and six each from Bethel and St. Patrick-St. Vincent. ... Vanden's LeVon Haynes is the East coach.