Berry on map with tourney win 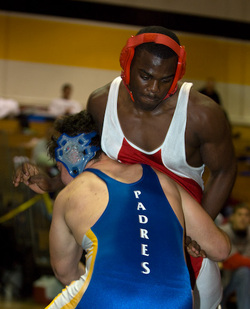 How was the party Dimitrius Berry? How did it feel to be the guest of honor at the Big Valley Classic in Stockton?

No, it wasn't initially planned to be your coming out party. Instead, you just kind of made it that way.

"It felt like all my hard work just paid off," Berry said. "Just to see the coach happy and hear the crowd scream because I won was a real good feeling."

Last weekend, the Vallejo High senior announced his presence on the Northern California wrestling scene by winning the heavyweight title at Stockton Arena. Berry put together a 5-0 record, and put a little emphasis on his arrival with a first-round pin in the championship match.

"It was the last match of the night and it sent the crowd home feeling good," said Vallejo coach Carl Lastrella. "It got the electricity up."

The pin -- over Pioneer Valley's Nick Leyden -- was Berry's only one of the tournament.

However, his most impressive win may have come in the semifinal.

That's where Berry took on Central Catholic powerhouse Matt Galas, and gutted out a 6-5 win over the third ranked heavyweight in the Sac-Joaquin Section.

That win meant that Berry -- who has a 15-2 record this season -- was among the premier wrestlers in the area, and will surely give him a boost when the next rankings are announced. He was sixth at heavyweight heading into the Big Valley Classic.

"In my opinion, I thought Galas was the No. 1 guy, to tell you the truth," Lastrella said. "Galas always
scares me. Dimitrius is the only guy that Galas didn't pin."

Berry has been waiting his turn to make his name on a regional -- and state -- level. He narrowly missed qualifying for the state meet last year at 215 pounds. This season, he is still trying to figure out whether he will go for state at 215 or heavyweight.

So far, all of his matches this year have come as a heavyweight. But at 235 pounds, Berry is giving away up to 50 pounds to some of his overgorwn opponents.

It's worked out just fine, though. Berry is an agile heavyweight surprising strength. He has surprised opponents on numerous occasions.

"He's very hard to coral," Lastrella said. "On bottom he is real slippery. "He has good lateral quickness, and being that small he surprised people with his strength because he is relatively strong."

But as the league, section, Masters and state tournaments draw closer, Berry will have to ponder his immediate future in the sport. He's had success at 215, but he's been nearly lights out at heavyweight.

"I'm pretty sure he could get to state at 215 and heavyweight," Lastrella said. "The dilemma is where does he feel comfortable at? He is doing a great job at heavyweight, I can see his dilemma. He wants to be on the medal stand in March. Right now we are looking at the rankings every week to see where he fits in."