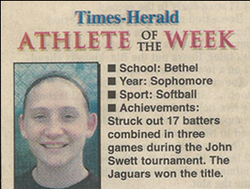 SACRAMENTO -- Once Bethel High School settled down, it was more than fine.The Jaguars routed host Sacramento High, 11-1, on Tuesday in an out-of-bracket softball game in the Sac-Joaquin Section Division II playoffs. It was the Jaguars' first playoff game in school history.

Senior pitcher Erica McClinton struck out 11 and no-hit the Dragons over five innings. She walked one and hit two batters. The only run that scored came after three errors by the Jaguars in the bottom of the first inning.

The game would stay 1-0 until the fourth inning when Bethel (12-11) exploded for seven runs, three of those after Bryana Smith's bases-clearing triple.

"We showed a lot more discipline at the plate in that inning," said Jaguars coach Richard Thomas, who announced he is stepping down after this season.

Bethel added four more in the fifth to close out Sacramento and advance to Friday's 5 p.m. game with Casa Roble of Orangevale on Field 3 at the Sacramento Softball Complex.

That was enough for McClinton, who dominated the Dragons (12-11) after the first inning.

"I told her, 'If you bring your velocity up, they can't hit you,'" Thomas said. "She really settled down and struck out the side a few times."

Rena Isogawa and Smith were both 3-for-4. Cara McClinton was 3-for-3.

Kristian Montgomery, Brianna Box and Sara Tagliaboschi were all 2-for-3. Jasmine Hornsby and Ashley Whaley were both 2-for-4.

The SCAC's other two qualifiers will begin the

Advertisement postseason on Friday, also at the Sacramento Softball Complex.League champion Benicia will face Del Campo, the third-place team from the Capital Valley Conference, at 7 p.m. on Field 4.

Vanden, the second place team from the SCAC, will take on Rosemont, the Metro League champion, at 5 p.m. on Field 4.