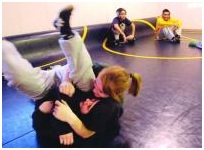 Every scrape, every sore muscle, every bit of pain suffered on the wrestling mat washes away with a hand raised in victory. The grind continues every day and the wear and tear mount with only one goal in mind: The championship.

The competition to prove who's the best is intense with the maturation of one of the strongest classes to come through the ranks in years, with the star power of Sam and Alice Hoover of Bethel High, Hogan's Christine Alcantara and Vallejo's Mary Jane Fernandez, leading the way.

"Something that stands out with our girls is they work hard in the room," Bethel coach Mike Sariano said. "Their drive and will is something more than what some boys have on the team. We set a goal for the team to place at State and the girls are focusing on that."

Before the boys teams get to the CIF State Meet in March, the girls have two big tests: the CIF Girls Regional this weekend in Sacramento and the unofficial girls state meet Jan. 30-31 in Hanford. The CIF still does not sanction a girls state championship.

It's taken a lot for girls wrestling to get to this point and every high school coach in the area points to where it all began for most of these girls: Springstowne Middle School.

"They plant the seed in these wrestlers at Springstowne," Vallejo coach Carl Lastrella said. "They know what to do when they get here. We try to clean up the middle school wrestling skills and sprinkle more seasoning on them."

Springstowne isn't the only training  ground, though. Franklin Middle School is feeding talent into the high school ranks, most notably, perhaps, Alcantara

Alcantara is taking on all comers, male or female, in her quest to win the

103-pound title in her senior year. She was third in the league last season and is the unofficial defending state girls champion.

"Our girls are tough. If they can handle the workouts and the competition, they're well-deserving of a spot on the team," Hogan head coach Ric Manibusan said.

When Hogan squares off in a dual meet against Vallejo on Feb. 4, it will continue a rivalry that started more than four years ago between Alcantara and the Apaches' Fernandez.

Fernandez has placed in the top three at State both of the past two years and "should have won both years," according to Lastrella.

The two will likely meet several times on the way to State -- the first came last weekend as Fernandez got the best of Alcantara in the title match at the Napa Valley Classic -- just as they have often crossed paths in the middle school ranks.

"The Hoovers, Mary Jane Fernandez, Ariana Reyes ... and Bethel has a ton of kids who came through here," Springstowne coach Jason Guiducci said. "It's a joy to see a lineup before a match and see that eight or nine of our girls are still wrestling.

"I like to keep abreast of the kids. It's nice to see how the kids are doing. On Bethel's end, they're doing phenomenally well in tournaments."

The Jaguars have been helped considerably by the arrival of Sam and Alice Hoover, who transferred from Hogan after last season.

"Their leadership, especially Sammy, they're great to have around," Sariano said. The Jaguars will be without Sam Hoover on the mat, though, as she recently suffered a broken collarbone.

St. Pat's has it's own group of girls with eyes on statewide recognition, including senior Yesenia Angel and sophomore Teresa Singzon, along with junior Catrina Gillis, who medaled at the State invitational last year.

Anyone following girls wrestling in the area should be excited, given the level of talent that will be on display this season. 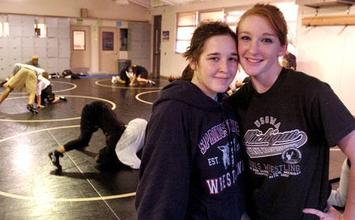 Samantha (left) and Alice Hoover from Bethel High are at the top of girl's wrestling in the area. The Hoovers and Fernandez came up through the Springstowne Middle School wrestling program. (Chris Riley/Times-Herald)