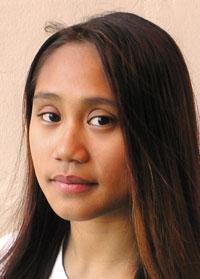 Vallejo High wrestler Jennifer Fernandez is trying to become the first female wrestler in California's history to advance to the boys state meet "the hard way," as Apaches coach Carl Lastrella puts it.

There have been a few girls - most recently in 1999 - from the San Francisco and Oakland Sections who have made it to state, but those sections consist simply of one league comprised of the public schools in those respective cities. It takes only winning a league title to advance to state.

If that was the case for Fernandez, she could already punch her ticket for Bakersfield having won the 103-pound Solano County Athletic Conference title over the weekend. But it's not that easy for Fernandez or anyone else in the brutal Sac-Joaquin Section. To advance to state out of the Sac-Joaquin Section, one of the toughest in the state, takes getting through an American Gladiators-like "Eliminator."

Fernandez has already completed the first step by winning SCAC. Next she'll have to place among the top five at the SJS Division III tournament - where she finished third last year - this weekend to advance to the section's Masters meet. And at Masters it'll take a top-seven finish to make history and advance to state.

That's "the hard way" Lastrella was talking about. And in trying to put into perspective the achievement should Fernandez complete it, Lastrella thought of another female athlete's triumph over men.

It was King, the 12-time Grand Slam women's singles champion, who made a statement on gender equality in sports in the "Battle of the Sexes" back in 1973, when she convincingly defeated former Wimbledon men's champion Bobby Riggs in straight sets, 6-4, 6-3, 6-3.

"That tennis match right there, where the girl prevailed and pretty much booty-stomped him," Lastrella said, "that's putting it in perspective right there."

Fernandez is a two-time unofficial girls state champion (because the CIF doesn't sanction a girls state meet) and realizes that she and other female wrestlers are pioneers at this point in time, when girls wrestling is still considered somewhat of a novelty. That being the case, she understands the significance of advancing to state and what it would do for the future of girls wrestling. She has a chance to leave an indelible mark on the sport.

"I think it's important, because it'll show different girls that this is not a man's sport anymore," Fernandez said. "A lot of girls do it and if we get more girls to do it, then maybe CIF will sanction our girls state meet."

Lastrella said Fernandez has a "decent" chance of making it to state this year. The natural disadvantages of speed and strength, which Fernandez admits, make it tough. But one thing Fernandez refuses to allow anymore is for boys to mess with her mind.

"Last year guys would always try to get into my head mentally first by saying, 'Oh, I beat that girl,' or, 'Oh, she's just a girl.' That actually motivates me," Fernandez said. "Last year at divisionals, some guy was talking and it felt good to beat him because he was in the locker room saying he was going to beat me fast. (Our match) lasted all three rounds."

That was the third-place match that Fernandez won.

The last four years have been a mental journey for Fernandez. She went from doubt to confidence gradually over time. The opportunity to do something no other girl has done is almost a reality. And now that it's so close, it's even more of a desire.

"Freshman year I said I wanted to do it, but I never believed I could," Fernandez said. "Guys scared me. They're bigger, faster, stronger, and probably have better technique. I always used to watch the bigger wrestlers wrestling in boys tournaments and how crisp their technique was, and I wanted be like that. I just thought, 'Maybe in another lifetime if I was a guy.' And now I'm so close to it that it could really happen that I want it to happen. I want to be there."