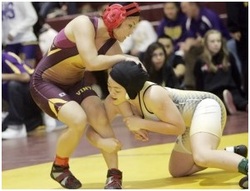 During her third week of preparation for the CIF Girls State Wrestling Championships, which will take place today and Saturday at Lemoore High School near Fresno, Jonnarose Palma has been cutting weight like crazy.

The Vintage High School senior wrestled all season at 114 pounds, before dropping to 103 for the CIF Sac-Joaquin Section Girls Championships Feb. 3-4 at McNair High in Stockton. After earning a return trip to states with a second-place finish there, her weight went back up to around 114 pounds — not from eating too much, but from working out in the weight room.

“I’ve been lifting a lot, so I think I gained muscle and I forgot about my weight. I gained weight unintentionally,” Palma said Wednesday. “I got weighed on Monday and thought, ‘How did I get there?’ I didn’t weight that much last week. I wanted to get some muscle to gain an advantage.”

Palma said she ran around the Vintage track to lose the weight.

“I feel I’ll be stronger than most of my opponents because I cut to 103s, but I’m weaker because I lost a lot of energy doing that,” she said. “But I feel like I’m used to this. I know what to do, what I have to do, and what it takes to get where I need to be.”

Palma placed third with a 5-1 record at last year’s state meet, the first one for girls wrestling sanctioned by the California Interscholastic Federation. She lost 4-1 in her semifinal to eventual champion Regina Doi of Kingsburg, whose twin sister Marina won the 98-pound title; both are ranked nationally.

Palma went on to place sixth at 105 pounds at the USA Wrestling Girls Folkstyle Nationals in Oklahoma City.

She knows the lack of energy from cutting weight will be over as soon as the tournament is over on Saturday.

“After the tournament you don’t remember how painful it was because you get to eat right after,” she said.

She’ll try to imagine each match is like one at any other tournament.

“I start to get ready two weight classes before mine and pray for a long time,” she said of her pre-match routine. “I think of the mood in my head and pray for the strength and wisdom for the match. I feel if I don’t pray, I’ll lose.”

She’ll also have the “moral support” of her best friend and teammate, senior Isabel Bito, who is coming along for the trip with coach Rob Lanterman and several younger teammates looking to get a taste of the state meet atmosphere.

“I can’t imagine going to state without her,” Palma said of Bito. “She was my best friend ever since I met her. When we first met I thought, ‘I hate this girl, but I love her at the same time,’ and we became best friends.”

She said she slept for most of the four-hour driving trip to Lemoore last year and had planned to do so Thurday.

Next week, she’ll return to practicing with the Vintage badminton team. She qualified for the section tournament in that sport last year in doubles. She’ll also be preparing for her last wrestling meet of the winter, the USA Wrestling Girls Folkstyle Nationals.

She said that the combination of working at a coffee shop in her hometown of American Canyon, tough senior classes, and facing her toughest competition ever have made this one of her hardest seasons.

In fact, “The Rise of Women’s Wrestling” is the title of her senior project.

“I think women’s wrestling is getting tougher every year,” said the daughter of Joey and Rowena Palma. “I would think it would be easier because I have been getting better every year. But every year, new freshmen come up who are better than some seniors.”

She’s also become more involved in her church, Praise Chapel Christian Fellowship in Vacaville, where her father is the pastor.

But she’s still pushing herself to go out big.

“I have to do well, make my final mark, put it all down,” she said. “There’s nothing to lose now.”

Douma ready to break into win column at state

But the sophomore, who won the 126-pound weight class at the prestigious ASICS Napa Valley Girls Classic at Vintage in January, is looking to have a far different state meet experience this year.

Douma, who became the first girl to win at the male-dominated King of the Valley Tournament as a freshman, is already in her sixth year of wrestling.

“Winning (at the ASICS meet) was a big confidence booster,” she said. “I’m trying to set a goal for this weekend, but I think I’m just going to try to do my best.”

She said she wants to do well even though she has two more years of high school wrestling.

“I still want to do good this year. I don’t care about next year. I’m just focusing on this year,” she said.

“I don’t really care if some of the girls I wrestle are two years older than me. We’re the same weight, so they don’t really have an advantage. It’s my last time this year, so I’m going to give it my all.”

Douma, a three-sport athlete at Napa High, will move on to playing soccer next week.

She was the No. 4 singles player for the Indians’ tennis team last fall.

She’ll be joined on the trip by parents Dave and Kim Douma, head coach Nacho Franco, his assistant coaches, and teammates Kortney Denna and Alyssa Vela, who competed at state last year.

“It’s going to be fun in the van with my friends on the way down,” she said.

Copyright 2012 Napa Valley Register. All rights reserved. This material may not be published, broadcast, rewritten or redistributed.