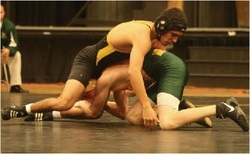 When Novato High’s Luigi Mendoza takes to the mat in this weekend’s North Coast Section wrestling championships at Newark Memorial High, he will face some tough opponents.

But it’s unlikely any will seem tougher to him than the challenges he’s faced the past few years.

The Hornet senior won the Marin County Athletic League 132-pound championship Saturday, and Novato coach Eric Brielmaier expects Mendoza to fare well at NCS even though he is not one of the top eight seeds. The top four finishers advance to the state tournament.

“You just can’t count him out,” said Brielmaier. “He’s one of those guys who takes pride in his actions, on and off the mat, and is willing to work extremely hard.”

It’s that attitude that has helped Mendoza endure and prevail while others might have given up.

Two years ago, an abusive father physically attacked his mother, Martha Ochoa, which turned out to be a defining moment for the young man.

He pushed his father away from his mother, “and in that push, he became a ghost, a poignant memory and no longer a part of my future.”

He went on to say, in applications he wrote to 18 colleges, “in that moment, I became the Atlas of my family . . . I would hold our world on my shoulders.”

In wrestling, Mendoza found a way “to keep other things outside my head,” and his success has grown while he has grown as a person.

In addition to achieving outstanding grades – he’s a 3.8 student – Mendoza has been a volunteer tutor and mentor in a program designed to help students “who are predominately under-represented in the college arena,” according to the Heart of Marin community service award he recently received.

In making that award, it was pointed out that “Luigi Mendoza has overcome insurmountable odds. He, along with his mother and two siblings, fled the home of their father to find solace in a local shelter for victims of domestic abuse.

“Having had the experience of being homeless, Luigi has become very passionate about giving back to the community and helping in similar situations.

“In addition to starting a lunchtime tutoring program at Novato High, he ran a program called ‘In A Box,’ that brought clothes and essentials for abused women and their children.”

Obviously, Luigi Mendoza is far more than simply being one tough customer on the wrestling mat.

Now the man of the family, he takes special pride in making sure his brother Alexis (“Paco”), 14, and sister Emily, 10, stay on the right course.

“When I become the first in my family to go to college, I will hold the doors open for Paco, Emily and my mom and all of those who have survived domestic violence and never lost hope.”

Mendoza has been accepted at nearby Dominican University and also at University of Portland. As much as he would love to stay close to his family, he candidly admits, “I will probably end up at a place I can get a good education and the most aid.”

He hopes to major in biochemistry, with the long-term goal of becoming an anethesiologist.

He applied to 18 colleges, including Stanford, where he was not accepted.

Mendoza is also in contact with Northwestern, Ilinois and Johns-Hopkins and hopes to hear from all of them.

He would like to continue wrestling in college, although getting an education is his top priority.

In addition to wrestling, where Mendoza has posted a 26-7 record, he also runs cross-country and competes in track and field.

“Luigi loves to run,” said track coach Steve Deschler. “Problem is, because he’s such a good wrestler, he comes into track five weeks behind the others.”

Even so, said Deschler, Mendoza has been competitive in the 1600 and 3200, and the coach expects the young man to be a factor again this spring.

As far as wrestling, Mendoza, who has wrestled since sixth grade, wants to do well this weekend and hopefully advance to the state tournament.

“I work hard but there is always room for improvement,” said the 17-year-old. “I don’t plan on losing.”

That would apply to his life as well as his wrestling.

“I’m confident that with the life skills acquired from wrestling and his hard work and dedication to every aspect of his life, Luigi will be a success,” said Brielmaier.

Mendoza understands and appreciates that success, but considers himself a product of hard work as much as anything.

“I love the sport, but never thought of myself as being a great wrestler,” he said. “I don’t look at myself as being athletically gifted . . . I just work hard to be better in everything I do.”

And, he added, “I’m just part of the team and don’t expect any special treatment.”

Mendoza recalls those days living in a shelter but sees better times ahead.

He included this information in his college application:

“During all that time, I never dropped a grade or missed a practice . . . I know now that with every ‘A’ I earn in my classes, I get one step closer to ending my mom’s long days cleaning other people’s bathrooms; and with every team I lead, I am pushing myself toward a successful career that will enable me to pull my family out of poverty.”