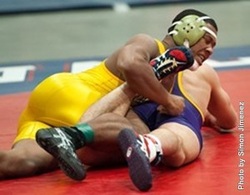 Frazier, a redshirt freshman from Vallejo, Calif., earns the honor after holding a 3.45 GPA. The recognition is the second all-academic honor the biology major has received this year after previously being named to the National Collegiate Athletic Association Div. II All-Academic Wrestling team, as selected by the NCAA DII Wrestling Coaches Association.

The 174 wrestler competed in six bouts before suffering a season-ending injury this season, including a 7-4 decision over then-ranked #7 Cody Caldwell of the University of Northern Iowa at the Cliff Keen Las Vegas Invitational to highlight his short season.