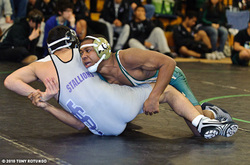 Stefan Foley has always been relatively calm about going to the California State Wrestling Championship. Of course, he was usually among the favorites to win.

As he prepared Thursday for another trip to Bakersfield's Rabobank Arena, Foley could hardly contain his nerves, even though he'll be more of a spectator this time around.

"I'm almost speechless. It all seems so surreal right now," said Foley, who was part of a dynasty of wrestlers at St. Patrick-St. Vincent High a decade ago. He's enjoying a new era of St. Pat's success, this time as the team's coach.

Foley is passing the torch to Bruins senior Magi Frazier, who opens the state meet today against Ventura High 152-pounder Honey Jordan. This will mark Frazier's first trip to state.

"I've worked so hard for the state tournament. This feels great," Frazier said. "My coaches have been training me the whole season for state."

"At this point, he put himself among the elite in the state. That's saying something the way California produces wrestlers," said Foley, who will be in the Frazier's corner, along with co-coach Andrew Altman, another former St. Pat's standout.

"I see a person who's dedicated to his goal of going to state," Altman said. "He's worked as hard or harder than anyone this season. He's done everything right to get to this place. He couldn't be better. This is what his career has been leading up to."

Frazier missed the draw for the state meet by the thinnest of margins last season. He's used that frustration as motivation this season.

"Magi's done exactly what I've asked of him," Foley said. "I've lived vicariously through him this year. It's been fun, he's definitely a blast to coach. ... Magi had a desire to put himself deep into the state tournament and he has a real good chance to finish in the top eight."

Jordan took sixth place in the Southern Section and if Frazier gets past him, the St. Pat's star will face the No. 2 seed in the state, Dillon Reid of Red Bluff.

"He has a tough draw ... but there are no weak wrestlers at state," Foley said.

Benicia 189-pounder Josh Lewis will face Ben Yura of Santa Monica in today's opener and Mark Ocampo of Rodriguez takes on Zack Zimmer of Clovis West in a 119-pound duel.

Frazier has dominated his opponents most of this season. He finished second in the North Coast Section championships on Feb. 27.

"I feel pretty good about this season," Frazier said. "I accomplished a lot of the goals I set for myself. I came up short a couple of times, but what I accomplished feels good."

None of those accomplishments have come easily, though, which has impressed his coaches even more.

"Magi's over-succeeded the things I wanted him to do," Foley said. "He wants to win and he's shown he can achieve it. He's on a final mission to finish this up."