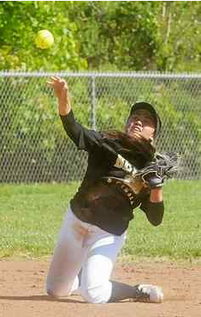 Jesse Bethel shortstop Marychris Peralta tries to get the third out in the top of the first inning throwing from her knees after a diving grab to her right of a ground ball. The runner was safe, but a strikeout of the next batter retired the visiting Fairfield High Falcons in Thursday’s game at Bethel. MIKE JORY — TIMES-HERALDBy Times-Herald sports staff
POSTED: 04/28/16, 10:03 PM PDT | UPDATED: ON 04/28/2016
0 COMMENTS

The Bethel High School softball team beat Fairfield 12-4 on Thursday to stay in contention for a Sac-Joaquin Section playoff spot.

Alyssa Esparza went all seven innings in the circle, allowing seven hits and four runs, two of those earned. She struck out 10 and walked two. At the plate, she was 2-for-4.

Kalia Molina, Isabella Esparza, Hailey Reagan and Cara McClinton also had two hits. Isabella Esparza ripped a triple while Molina and Marychris Peralta both had doubles.
​
Bethel hosts American Canyon on Tuesday in another key SCAC battle. The Wolves fell into fourth place after losing to Vanden on Thursday.

The Solano County Athletic Conference announced its all-league selections for softball on Thursday and many local players made the cut.

The Most Valuable Player was Vanden High’s Dari Orme, a pitcher with the Vikings.

On the third pitch of the softball game between Bethel High and Vallejo High on Tuesday, Jaguar senior Marychris Peralta hit an inside-the-park home run.
It was a sign of things to come.

For the next five innings, the Jaguars offense was in full force at Dan Foley Park as they banged out 17 hits and were dealt a black jack against their crosstown rival Redhawks in a 21-4, five-inning win.

Bethel seniors ruled the day as Cara McClinton had four hits and three RBIs, while Peralta finished with three hits and a walk and reached base in every inning. Her home run, however, set the tone.

“You know I was just kind of letting the pitcher come to me and I was looking for my pitch,” Peralta said. “I found it and I took it.”

Bethel (3-8, 2-3 in the Solano County Athletic Conference) led 1-0 after the first and then added three more runs in the top of the second. The rally was highlighted by a two-run single by sophomore Destiny Bernstine. She finished with three hits and was hit by a pitch once.

The third inning was when Bethel put the game away as the Jaguars scored nine runs in the inning to take a 13-0 lead. Hailey Reagan had an RBI triple and walk in the inning, while McClinton added a single, double and two RBIs in the inning.

“I think our timing got a lot better after everyone went to bat the first time,” McClinton said. “We were used to the pitcher by then and some of us, including myself, went to more of a slap-hitting approach. It was more of a timing thing.”

Vallejo (0-6, 0-5 in the SCAC) answered in the bottom half of the third when Aleya Cruz tripled in a run for the Redhawks to put Vallejo on the scoreboard.

“Aleya is a rock and she’s been our rock for the last four years,” Vallejo head coach Alison Ford said. “She’s definitely a leader for us. It’s hard to stay mentally focused when you’re losing as much as we were today but she always gives 150 percent every time she goes out there, regardless of the score.”

Cruz would have Vallejo’s only two hits on the day though as Bethel starting pitcher Alyssa Esparza was in total control for four innings. She gave up just the two hits, one run and stuck out four.

“She was doing a good job of moving inside and outside of the plate with a little rise to her pitches,” McClinton said. “As long as her defense backs her up, she’s fine. She’s going to be good.”

Bethel added another five runs in the top of the fourth inning to make it 18-1 and then three more runs in the top of the fifth to make it 21-1. Esparza, who also finished with three hits offensively, drove in one run in the fourth with a single, while the fifth inning was highlighted by an RBI single by Peralta and a bases-loaded walk by pinch-hitter Destiny Graves and an RBI single by Isabella Esparza.

Vallejo added three runs in the bottom of the fifth off relief pitcher Reagan.
“I liked how we all worked together as a team today,” Peralta said. “We were all positive with each other. It’s also a rivalry game and we have a lot of friends on Vallejo so we try and have a fun game against them.”

ABOUT THE AUTHOR
Been working at the Times-Herald full time since early 2011, was a stringer from 2001-2004 while in college at San Francisco State where I studied Journalism. Have worked as a copy editor and sportswriter since 2011. Fan of Dodgers, Angels, Lakers, Kings and Raiders. Reach the author attgase@timesheraldonline.com or follow Thomas on Twitter: @tgasevth.