In a class by himself 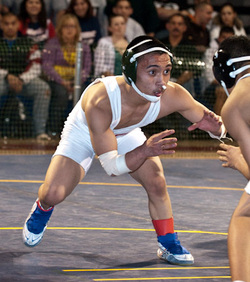 Few would call Michael Lim menacing at first glance. Those who have seen him on a wrestling mat know otherwise.

An 18-year-old senior at El Camino High in South San Francisco, Lim has stood roughly at 4-foot-10 since his sophomore year. He barely weighs 100 pounds, but that's by design because he wrestles in the 103-pound weight class — the lowest on the card.

The one thing no one has a way of measuring is his heart.

"I think my height, my size, it has a lot to do with how I do on the mat," Lim said. "A lot of wrestlers are not used to taking on someone of my stature."

A P.E. teacher asked Lim to give wrestling a try in the sixth grade, back when he was 12. A scrappy grappler, Lim had to learn the sport from scratch as he struggled to pick up the nuances.

"I was probably a very bad beginner," Lim said.

But he loved competing in front of a crowd.

Lim moved to South San Francisco to live with his mother after spending freshman year in Walnut Creek. Originally headed to Jefferson High in Daly City, the Colts of El Camino became the choice of preference because they had a wrestling program.

"My team has supported me ever since I got here," Lim said. "I was the new guy coming into their mat and they took me under their wing."

Lentz, who was an All-American wrestler at San Francisco State, knew early on he had  something special in Lim.

"He had those type of qualities that set him apart from the regular type of athlete," said Lentz, in his fifth year at El Camino. "Just incredible focus, exceptional strength, exceptional ability to pick up new moves right away and implement them."

Sophomore year Lim was crowned the top 103-pounder in the Peninsula Athletic League, but he fell one spot shy of reaching the state championships.

Junior year the goal was state. Mission accomplished after he repeated as PAL champ and finished third at the Central Coast Section championships.

"I didn't know what to expect at state, it was kind of overwhelming competing against the best," said Lim, who lost to the state champion in his first bout, but bounced back with a victory before being eliminated.

Now, as a senior, Lim is not the hunter but rather the prey. He has a target on his back as the top-ranked 103-pound wrestler in CCS. He's teetering on a top-8 ranking in the state.

"I never ever, ever would've dreamed of it. I had no intention of wrestling in high school," said Lim, who won the Overfelt Tournament and is 12-1 on the season. "Everyone is CCS is wanting to take me down. All the guys that are ranked behind me want the CCS title as badly as I do. I gotta step my game up."

Lim reaggravated a chest injury last week in a match against Menlo-Atherton, so he chose to sit out the competitive Mid-Cal's at Gilroy over the weekend. It would've been his toughest test of the season thus far, but he's not worried about skipping it.

"I think it's actually going to push me to want it more come CCS," Lim said. "I'll probably be more hungry for matches."

His coach is a believer.

"The only thing that would keep him winning the whole thing is himself," said Lentz, who treats Lim as he would a college wrestler.

Most of Lim's wins come through points rather than pins, so it's not rare to see him wrestle the full six minutes. Instead of lifting weights all the time, he strengthens the legs and adds quickness — lethal when combined with his low center of gravity and sense of body awareness — with cardio workouts.

"It's all just running and speed for me," Lim said. "My legs are actually the key to my success. With my legs I'm able to move around the mat faster and quicker."

One wrestler Lim has never defeated is his girlfriend, Christine Alcantara. A senior at Hogan High in Vallejo, she's the defending girls state champion at 98 pounds.

"We never try to wrestle each other. We like to stay equal," Lim said. "She's my inspiration to do well."

So does that mean to be truly equal Lim must win the state title at 103 pounds? Those who've witnessed Lim run circles on the mat know better than to underestimate his chances.