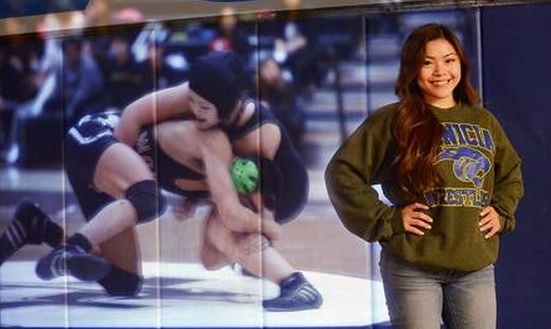 Benicia High’s Ricki Liang excelled on the wrestling mat for the Panthers last winter as she won a state title in the 121-pound weight class. Chris Riley – Times-Herald

Before Benicia High senior Ricki Liang ever thought about becoming a wrestler she competed in swimming.

Instead of continuing to compete in the water, however, Liang followed in the footsteps of her older sister, Frankie, and became a grappler for Springstowne Wrestling Academy. Not since the character “Neo” chose the red pill in the movie “The Matrix” has a decision been as good.

Although Liang struggled at first, she soon became so dominant in wrestling that she would win enough medals to make Michael Phelps jealous. After becoming a two-time state winner in middle school, Liang made the state tournament four times in her high school career at Bethel and Benicia high schools. During her senior year at Benicia she finally broke through to win a state title in the 121-pound weight class.

She is also a Times-Herald Female Athlete of the Year Finalist for the second consecutive year.

“When she came to Springstowne as a sixth grader, she had never competed and her sister was her exposure to the sport,” Springstowne coach Jason Guiducci said. “She was as green as she could be to the sport and didn’t exactly set the world on fire. She was about a .500 wrestler as she won some and lost some. Then she won a state title during seventh grade and she was off and running after that.”

Liang said she was kind of a “happy-go-lucky” type wrestler and thought the sport was challenging because she wasn’t used to putting herself in uncomfortable positions.

“I wasn’t thinking at all that someday I would win a state title,” Liang said. “I wasn’t good at all. Springstowne hosted a lot of tournaments though and after a little while I started winning some matches. The coaches would always stress doing extra work on your own and after a while I realized that I was putting in some more work than other girls and maybe that is why I was winning.”

Liang took the extra work talk to heart, especially near the end of her time at Springstowne.

“We were having a banquet for the end of the year after her eighth grade year and everyone was all fancy and dressed up for it,” Guiducci said. “I was talking first about some of the younger girls and then finally at the end I began to talk about Ricki. I asked where she was and someone said, ‘She’s not here.’ I was like, ‘She’s not here? Where is she?’ Someone in the crowd told me she left to go train. And that was her in a nutshell.”

Liang’s success didn’t stop once she began high school wrestling at Bethel as she took third place at the state tournament her freshman year in the 114-pound division.

“I didn’t really hang out with her that much, but we knew each other from the wrestling world,” Gonzalez said. “Each time we wrestled we kind of went back and forth. I think we ended up tying each other with two wins each. Her style really works for her. She’s a defensive wrestler and a smart wrestler.”

Liang transferred to Benicia for her senior year but she was still in search of a state championship. After making it to the state tournament three years in a row, Liang still hadn’t taken the top spot.

That all changed in February of this year when the 121-pound grappler finally got her state title by defeating Daishea Jaime of San Dimas 2-0 in Visalia. Liang got a takedown early in the match and held on for the victory.

“I tried to take a bigger lead than 2-0 in the second period with reversal’s, but she was a very good wrestler,” Liang said in March. “With a 2-0 lead in the third period I wasn’t going to try any desperation moves.”

Liang will now move on to wrestle at King University in Tennessee, where she will be teammates with 2013 Benicia High graduate Forrest Molinari.

“That school has won nationals a lot and has a lot of world team members,” Liang said. “I want to continue to wrestle to the best of my ability and I’ll be wrestling with the best team.”

ABOUT THE AUTHOR
Been working at the Times-Herald full time since early 2011, was a stringer from 2001-2004 while in college at San Francisco State where I studied Journalism. Have worked as a copy editor and sportswriter since 2011. Fan of Dodgers, Angels, Lakers, Kings and Raiders. Reach the author attgase@timesheraldonline.com or follow Thomas on Twitter: @tgasevth.