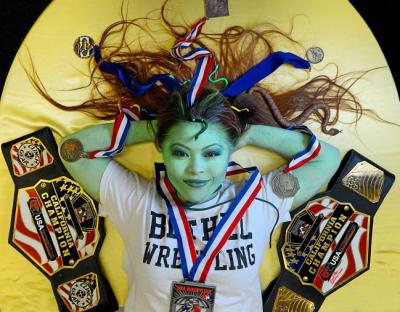 Make up: Christine Cooley and Beth Bethany Garibaldi. Photo by Chris Riley-Times-Herald -Ricki Liang turned opponents to stone on the wrestling mat at Bethel High School. Liang finished second in the state championships last winter after placing fifth the year before. She was second at the Sac-Joaquin Section Masters meet and was dominant all season, winning championships like one in Castro Valley early in the season.
﻿Bethel High wrestler Ricki Liang turned opponents to stone﻿
Bethel High junior was dominant on the wrestling mat
By Matt O'Donnell
modonnell@timesheraldonline.com @modonnellvth on Twitter
POSTED:   07/25/2014 10:29:15 AM PDT
In some ways, Bethel High School wrestler Ricki Liang and fictional race car driver Ricky Bobby have a lot in common.

"Talladega Nights" star Will Ferrell often repeats his catch phrase, "If you're not first, you're last."

Liang is not exactly known for saying that during wrestling season, but the Jaguars' soon-to-be senior always has first place on her mind. That is one of the reasons she is a Times-Herald Athlete of the Year candidate.

When asked about her junior season, the second-place finishes in the 116-pound division at the Sac-Joaquin Section Masters and state championships still eat at her a bit. Many wrestlers would be overjoyed to finish that high.

"My senior year, I want to win state," she said. "I've come too close too many times."

Since her freshman season, Liang has been one of the most dominant wrestlers in the area. She was third at state as a freshman and then fifth as a sophomore. Liang estimated her junior season record was 20-3.

Her only loss at state last winter came to Dominique Parrish of Scotts Valley. She avenged a section defeat to Livingston's Gurleen Chahal by beating her at state, 9-0.

Bethel girls wrestling coach Usiku Barrow said when he first saw Liang, she was a spectator at one of his volleyball matches. He thought to himself that she was "one heck of an athlete."

When Barrow began coaching her, he knew she had the work ethic to match her physical tools.

"Her passion for the sport is unparalleled," Barrow said. "You can see that she loves the sport because she has total dedication to it and she puts in the hours to get better."

That dominance started even earlier when she was a part of Springstowne Middle School's spectacular program. Liang won three straight state titles there, going 27-1 as a seventh-grader, her only loss coming to Napa's outstanding wrestler Maggie Douma (now headed to Oklahoma City). Liang proceeded to finish 26-0 as an eighth-grader.

"When she came in, she didn't set the world on fire; it was progressive," said Springstowne coach Jason Guiducci. "Toward the end of her sixth-grade year, she was getting to be really good. From there, she was pretty much unstoppable."

"I think she was inspired by her sister," Guiducci said. "She is just very driven to be the best wrestler she could be."

Guiducci said in the history of Springstowne, ﻿Alyssa Wong, Shelly Avelino and Ricki Liang﻿ are probably the top three female wrestlers. Wong was a two-time Times-Herald Female Athlete of the Year and Avelino won a section title last season.

The sport began to grip Liang at Springstowne.

"I liked the grind," Liang said. "I liked how the hard work pays off."

Liang was coached by Mike Sariano her freshman season at Bethel and she has been under the guidance of J.J. Dunbar and Barrow the last two seasons.

"My older coaches really helped me improve," she said. "The coaches now are different and I've learned things from them too. They have different styles."

Liang competes for coach Carl Lastrella on the 4 Horsemen Wrestling Club and finished second at the USAQ Girls Folkstyle National Championships in Oklahoma. She earned All-America status for her finish.

"He's really challenged me to change my style sometimes and be a better wrestler," Liang said. "He's made me work harder and to change it up a little bit."

Parrish, Liang's nemesis, is back for her senior year as well and Liang knows that is probably the wrestler she will have to beat at state to grab that elusive championship.

"Most likely, but it all depends on the weight classes," Liang said. "I don't want to change weight classes to avoid her. I want to wrestle her again."

"Her passion for the sport is unparalleled," Bethel High coach Usiku Barrow said about Liang. "You can see that she loves the sport because she has total dedication to it and she puts in the hours to get better."