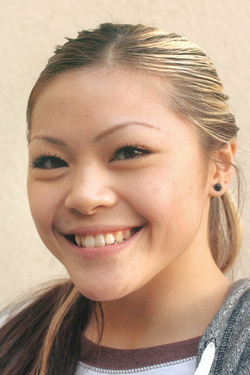 Bethel High wrestler Ricki Liang had a very successful freshmen season, but so far she's proving there isn't a sophomore jinx in the works.

After placing third in the 114-pound weight class at the state tournament a year ago, one might think asking the Jaguar sophomore to improve would be like asking a band to follow a Beatles' performance, but so far Liang is doing just fine.

This week she avenged an earlier-season loss to Alyssa Gonzales, by defeating the Benicia High grappler in the finals of the 14th annual Vineyard Classic in Napa. The tournament is one of the biggest of the year as nearly 100 hundred schools compete and she was able to improve to 3-1 this season against Gonzales and take first in the 118-pound weight division.

The performance helped her earn this week's Times-Herald Athlete of the Week award.

When asked what she changed the most since her loss to Gonzales, Liang said it was her attitude.

"Sometimes it's just my mental awareness that isn't there," Liang said. "This was a big tournament so I knew I couldn't let that (a loss) happen again. I fine-tuned some moves, but mostly it was just me believing in myself."

Liang said this season has been different since she is looked upon to be Bethel's top wrestler with Alyssa Wong and Liang's sister, Frankie, having graduated. Although she's one of the top returners, she doesn't necessarily see herself as a leader.

"It's kind of nice to know that I'm one of the top wrestlers, but I have to

acknowledge that Alyssa and Frankie aren't here anymore," Ricki Liang said. "I'm always happy to help anyone on the team that asks for help or needs it, but I don't like to see myself as a leader or a captain."

Although Frankie Liang isn't wrestling at Bethel anymore, Ricki said she still gets good advice from her older sister.

"She basically tells me to keep learning," Ricki Liang said. "Every loss is only a loss if you don't learn anything from it. You can always keep improving, even when you win."

Another change the younger Liang is dealing with this season is a new coach as J.J. Dunbar took over for Mike Sariano this season. So far Dunbar has been very impressed with Liang.

"I like her consistency in how she's always wrestling, she's always moving," Dunbar said. "I try to teach that to the other wrestlers, but I don't really have to do that with her, she already has it. I like that she doesn't show any weakness."

Although Dunbar wasn't at Bethel a year ago, he already realizes that Liang has the potential to take first this year at the state tournament. In order to make that dream become a reality for Liang, Dunbar has the sophomore wrestling in different scenarios and situations, including wrestling with the boy wrestlers more.

In the meantime, Liang knows that she has more great battles to come with Gonzales.

"She's a great wrestler and she provides great competition for me," Liang said. "She always keeps me on my toes and keeps me wrestling my best."

• Nikki Andaya, Benicia girls basketball. Andaya had 17 points, six assists and two steals in a win over Vallejo, while she recorded 12 points against Alhambra.

• Jalen Canty, St. Pat's boys basketball. Canty had 17 points and 12 rebounds in a loss to Salesian.

• Jessica Chen, Vallejo wrestling. Chen lost in the semifinals of the 190-pound weight class at the Vineyard Classic in Napa.

• Kiana Desrosiers, St. Pat's girls basketball. Desrosiers had 19 points for the Bruins in a win over El Cerrito.

• Jessica Maguire, American Canyon girls basketball. Maguire had 12 points, including the game-winning basket with three seconds remaining in regulation to give the Wolves their first-ever Solano County Athletic Conference win.

• Micah Parinas, North Hills girls basketball. Parinas had 17 points and 10 rebounds in a win over Patton.

• Noah Wellington, Bethel boys basketball. Wellington scored 28 points in a loss to Deer Valley, and 18 points and 10 points in wins over Alameda and Vanden.

• Adrianna Williams, Benicia girls basketball. Williams had 23 points and seven rebounds against Alhambra, while she also recorded 16 points in a win over Vallejo.