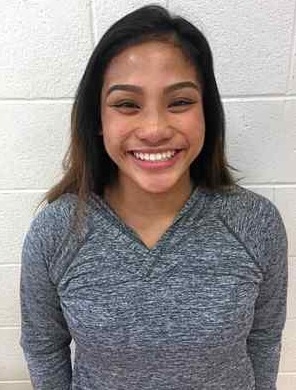 Most high school wrestlers in the world would be thrilled with finishing fifth in the state in their respective weight class. They’d be overjoyed, jumping up and down, telling all their friends and sharing their accomplishment all over their Twitter page.

Shelly Avelino is not one of those people.

Although Avelino’s fifth place finish her sophomore and junior years were great, she wanted more. A year ago in Bakersfield she was like the Uncle Rico character in the film, “Napoleon Dynamite.” She just wanted to “go back in time ... and take state.”

Last Saturday after a ton of hard work, she finally took state.

Avelino defeated Westminister’s Aine Drury by pin in the second round to win the state title in the 137-pound division. For the second straight week and third time this school year, Avelino is the Times-Herald Athlete of the Week.

“Last year when I placed fifth I knew that I had placed fifth the year before, so I didn’t improve at all,” Avelino said. “I figured I could go about it in two different ways. I could be all sad and not do anything about it, or I could get back to work and try to get back.”

Avelino went 2-0 on Friday night to advance to the semifinals in Bakersfield, but was pretty nervous about the next day.

“I knew I would be wrestling against Mikayla Miles of Nordhoff in the next match and she is super tall, so I got nervous,” Avelino. “When you look at someone and how tall they are or how big they are, you are never comparing them to yourself. All you see is them.”

Avelino got the win over Miles, however, and all of a sudden was in the finals.

Then she had to wait.

Avelino waited seven hours for her next match, pacing back and forth and watching consolation rounds. Benicia coach Craig Holden knew it was best to just stay away during this long waiting period.

“I just wanted to stay away from her. The more I’m around her the more nervous she is going to get,” Holden said, with a laugh. “I told her that when it got closer to the match then we would talk. But she’s been in these kind of situations before. She’s been wrestling since she was 6 and had several hundred big matches. Maybe not as big as this one was, but she was no stranger to big matches.”

Avelino had never wrestled her finals opponent, Drury, and didn’t know much except that she had a background of jiu jitsu.

“I wasn’t actually that nervous once I got to the finals,” the Benicia senior said. “Maybe because it was someone I didn’t know that much about is why I didn’t get as nervous. I just told myself this can go one of two ways — I can win, or I can lose.”

Thanks to a nice move in the second period, she ended up a winner.

“She had a few takedowns on me already, but I started out on bottom and scrambled to get her on her back,” Avelino said. “I guess during the whole tournament she hadn’t been on her back. I used that split second when she was on her back to get my move down — an arm bar, and I ran it well. A lot of wrestlers when they are in that situation they will struggle and move and try and get away. She didn’t really move at all. I think she was just shocked because it hadn’t happened to her yet, like she was saying to herself, ‘What am I supposed to do?’ But she was a real tough wrestler. She had to be to defeat the defending state champ and get to where she was at.”

As soon as the ref hit his band on the mat to signify the win for Avelino she was smiling and full of joy.
“I was happy to finally say it. I am a CIF state champ,” Avelino said with a big smile on her face. “Forty eight hours later it’s still weird. I look at the big poster I have in my room and ask myself, ‘What is that doing there? Oh yeah, I won.”

Avelino said she knew she was making progress in her training during the year when needed more laundry trips.
“I thought about it a little, and as a freshman and sophomore there were a lot of days I didn’t sweat that much on my clothes. As a junior and senior, my clothes were a little more damp,” the 17-year-old said.
As soon as Avelino won, Holden said that all the coaches were ecstatic.

“We were all jumping around like fools,” Holden said, with a laugh. “She’s just an unbelievable kid, and unbelievable wrestler. She had a lot of work ethic and it’s great to see someone work as hard as she did and get what she was going after. Sometimes you see people not put in the work and still get rewarded. But it’s really great when you see someone like Shelly that does put in the work and then get what she deserves.”
​
HONORABLE MENTION
• Ryley Boutain, Alejandro Lanza, Fernando Lanza and Basil Othman, Benicia High boys wrestling. Boutain came in second place at the Masters tournament by going 4-1. Alejandro Lanza and Fernando Lanza each came in third place, while Othman also qualified for the state tournament next week.
• Antonia Diaz, Benicia girls soccer. Diaz had a goal in the 2-1 overtime loss to Manteca.
• Tavian Henderson, St. Pat’s boys basketball. Henderson scored 21 points in the Bruins’ win over Gateway. He had 16 more points in a win over Piedmont.
• Gamon Howard, American Canyon boys basketball. Howard had 17 points in a loss to Place in the first round of the playoffs.
• Jose Lopez, American Canyon boys soccer. Lopez got the win in goal in the Wolves’ playoff win over River Valley.
• Tara Othman, Benicia girls wrestling. Othman came in fourth place in the 116-pound division at the CIF state tournament in Bakersfield.
• Juan Perez, Bethel soccer. Perez scored twice and had an assist in Bethel’s first-ever playoff win over Mira Loma.
• Trey Pugh, Benicia basketball. Pugh had 27 points in a first-round playoff win over Center of Antelope. He also had 16 points in a loss to Capital Christian.
• Tameiya Sadler, St. Pat’s girls basketball. Sadler scored 25 points in a loss to Marin Catholic on Saturday night.