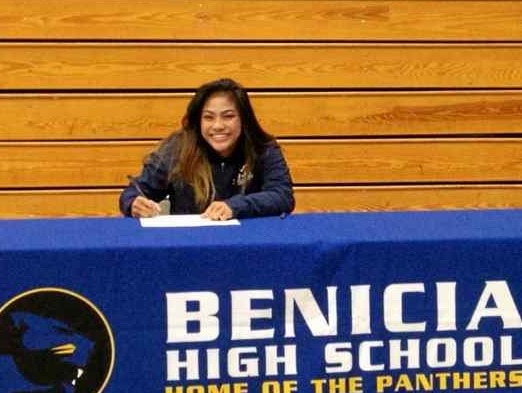 But when Avelino signed with the small school in Atherton as a senior, she did so as a state champion.
Avelino, 17, made her commitment official Friday morning by signing a letter of intent just a few weeks removed from grabbing the CIF State Championship in Visalia. The senior pinned Westminister’s Aine Drury in the second round to win the state title in the 137-pound division. It was Benicia’s second state title in wrestling in school history.

“I was super nervous and I don’t know why but it’s a big commitment for the next four years,” Avelino said. “It feels good to be signed and knowing what’s next.”

Athletic director and girls wrestling coach Craig Holden talked about what it was like to coach Avelino for four years. Holden said Avelino’s record over those four seasons was 105-9.

“There’s no secret as to why she is getting a scholarship,” Holden said. “She has good grades. Her GPA is over 3.0 and the nine (Benicia) kids who have signed this year for college, all nine of them have over a 3.0. That’s step number one. Step two is hard work and dedication. Shelly works as hard as anyone I’ve ever seen at her craft. She works seven days a week. Sometimes she’s hurt and she’s still working.”

The senior said she likely would drop down in weight classes in college. She doesn’t consider maintaining or dropping weight to be a big deal.
“I don’t over-eat, I don’t go crazy over food when I’m not hungry,” she said. “When I’m not hungry, I’m not going to eat and when I am hungry I will eat just a little bit to make my stomach feel good.”
Avelino isn’t completely decided on what she is going to study but is considering history or psychology. She likes the area around Menlo, saying it was a little bit similar to Benicia.

Bareng was pleased to have Avelino come aboard.

The Oaks finished in fifth place finish at nationals in Oklahoma in February and had six different individuals place and earn All-American status.
​
“We’re happy she chose us,” Bareng said. “She is a very aggressive wrestler and that’s the kind of athlete we want. But more importantly, she is a family person and those are the kind of people we want on our team.”