Zerick Silas was in the middle of wrestling practice when Vallejo High students allegedly attacked a city worker just blocks from campus.

"It was disappointing that they could do that," Silas, 16, said of the Feb. 1 beating.

Since then, a series of violent crimes -- from the shooting of an ice cream truck driver, allegedly by a 15-year-old, to three homicides so far -- have rocked the city and spurred deep soul-searching within the community.

But for Silas, a Vallejo High sophomore, violence is not the answer. As such, the would-be police officer has joined the ranks of the Solano County Guardian Angels to become the youngest member of the volunteer patrol organization.

"One of the things that the Guardian Angels are  trying to do is always try to go back to the youth," chapter leader Omar Martinez said.

If teenagers like Silas are taught values early on, it could reduce youth violence, Martinez said. Both Martinez and Silas were at last Wednesday's Vallejo Together, a forum created to address rising crime and other issues in the city.

Activities like wrestling also give youth a way to channel their energies and give them something to do, preventing them from falling in with the wrong crowd, Silas said.

"I didn't want to get kicked out of wrestling," Silas, a 2010 league champion, said as an example.

But at the same time, simply offering opportunities to others his age is not enough, Silas said.

"Any student can be helped, but you can't force someone to do something. You have to want it. You have to give them a reason to want it," Silas said.

Silas encourages other students to participate in more community activities.

Besides wrestling, Silas plays other sports in the off season and plays guitar for his church. He hates math, but his favorite subject is history.

"You can never erase history because it'll always be with you. Our genes are history," Silas said.

Indeed, his passion for history has led Silas to explore his own mixed-race lineage (his father is black; his mother is part Belizean).

Education is important to Silas, who prioritizes his schoolwork over everything else. With the blessing of the Guardian Angels, this means he spends much of his time doing homework or wrestling rather than on patrol. 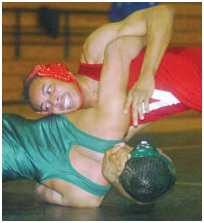