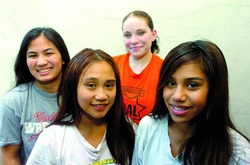 Once was great, twice was definitely nice. But three in a row? Now that's something else.

The Vallejo High girls wrestling team might not be the talk of the town, but the Apaches certainly are one of the - if not the - most successful team in Vallejo.

What other program can boast of winning three consecutive state titles?

Well, the Apaches can, their third coming in late January when they won the California State Tournament.

Vallejo tallied 160.5 points to complete the three-peat, 20 ahead of cross-town rival and NorCal Regional champion Hogan.

"I could not be more pleased with the girls," said then-Apaches coach Mike Minahen.

Individually, it was Angie Miller who led the way for Vallejo. She completed a near-flawless season when she claimed the 138-pound championship with a 5-4 decision over previously-undefeated Jade Anderson of Royal-Simi Valley.

Miller was perfect all season in the 138-pound division but lost once at 144  pounds to the nation's second-ranked wrestler in that weight class.

"Very good," Minahen said of Miller. "(There was) one mistake in the final that scared us, but she was able to get away. She was very good."

The story of determination and mind-over-matter came from the Fernandez sisters, Mary Jane and Jennifer, who battled sickness to do their share in contributing to the team title. With both girls suffering from flu-like symptoms, Jennifer took second at 105 pounds, while Mary Jane finished third at 98 pounds. Mary Jane nearly vomited during the semifinals.

"I'm very pleased and impressed with them ... not at 100 percent strength and still battled like champions," Minahen said. "It was huge. Without them, we're not even close."

And then there were those girls who did their parts in consolation to rack up crucial team points. Jennifer Avelino went 5-1 with five pins to finish third at 144 pounds. Jennifer Steele and Sabrina Ross were also big, placing seventh at 154 pounds and eighth at 98 pounds, respectively, to accumulate much-needed points.

This season, under first-year coach Carl Lastrella, Vallejo will look to make it a four-peat. And why not? The Apaches graduated nobody from last year's team, though Miller has hung up her shoes because of a series of concussions.

Still, that would be something else, wouldn't it?