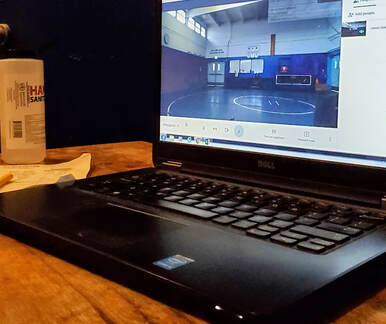 Our program is currently trying to navigate its way in the "Covid-Era" ... our staff has been trying to instill our Wildcat Nation Mojo using technology. Should be interesting ... stay tuned!!! 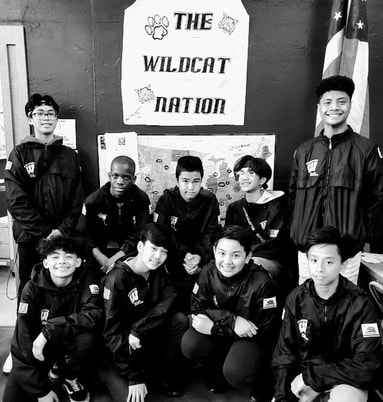 Our Wildcat Boys Encouraged To Keep Their Heads High
With concerns about about the COVID-19 aka Coronavirus looming we began taking early steps from increased daily hygiene talks, extra cleansing of mats, staging hand wipes in all areas of our matroom and even decreasing contact drills.

As things locally and nationally seemed to be growing we decided not to host the USGWA Nor-Cals on 3-12-20 and to cancel our Wildcat Nation Boys Travel Trip to Louisiana set to occur on 3-13-20. All wrestling action is on hold until we know more as information seems to change by the minute!

We love our Wildcats and felt this was the best way to proceed during such an unprecedented global situation. There is much sadness amongst our Academy Wrestlers at missing out on a sport they cherish, but we know it’s the right decision based on the information we have today.
​
Be Safe and We Will Stay In Touch! 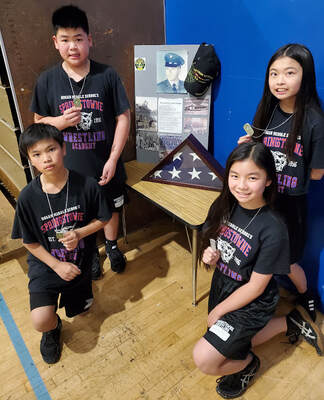 Our Vietnamese-American Wildcats Represent At Classic
The 11th Hoang Van Thu Classi​c, which is held in memory of Vietnam Veteran James P. Guiducci, drew a packed house as the Wildcats squared off with Bancroft of San Leandro and the Napa SAL at the Goodwill event to help support Hoang Van Thu School in Viet Nam!

Prior the event HMS students were awarded Wildcat Wrestling Tee-Shirts for their Inspiration Award in memory of Trinh and Tram Tran after leading the National Anthem. A great evening of wrestling followed!!!

Bancroft and Napa SAL Back For Annual Tri-Scrimmage

Tough Night Of Wrestling vs Jepson-Vacaville 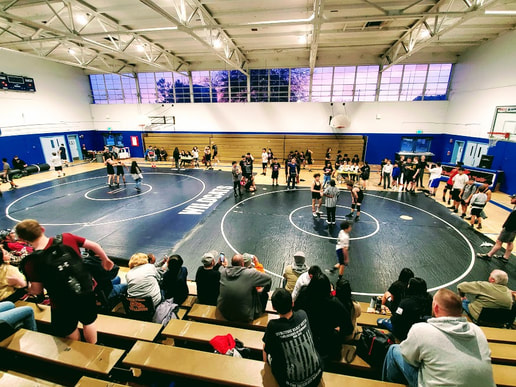 The Jepson Jaguars of Vacaville traveled to Vallejo for a Dual and showed why they are one of the top teams in California winning out scoring the Wildcats 99-6!
Vicente Rodarte picked up the Academy's only points scoring a :45 pin in the 116 pound class.
In exhibition action we found some success as John Reg and Rodarte went 2-0, while Aggy Alansalon, Jhay Pedeglorio, Alex Pepito and Daniel Bruce-Fielding were able to tally pins. 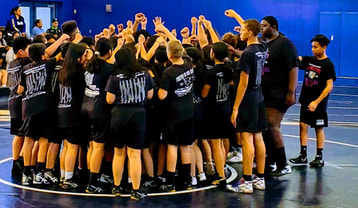 Wildcats Shine In Their Last Tournament Of The Decade 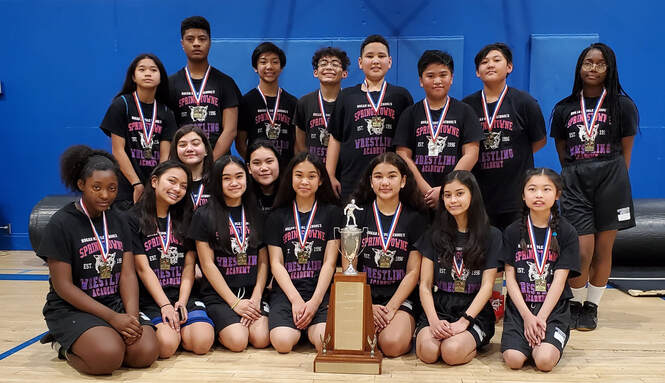 6 In A Row For The Wildcats 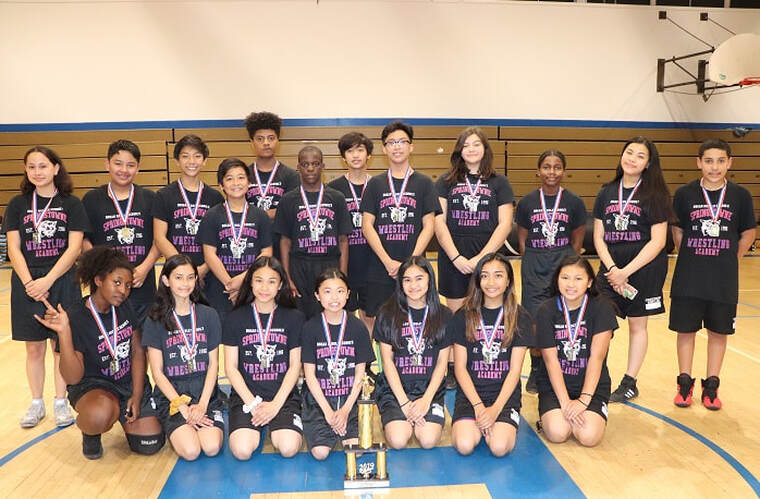 The Wildcat Victory was dedicated to Joey Mesa, avid Springstowne Wrestling Supporter and proprietor of Vallejo's Keepin' It Island BBQ who passed recently!!! 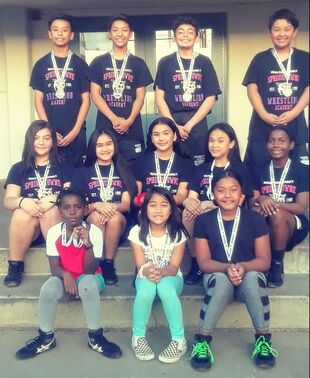 Takedown Tournament Champions
Ten Academy Alumni returned to help facilitate our Alumni Clinic in an effort to educate our current Wildcats to further advance their skills.

We were also thrilled to have three participants in our "Future Wildcat Clinic."
Irene Nansubuga. Aliah Pepito and Tia Limutau earned medals for their efforts! 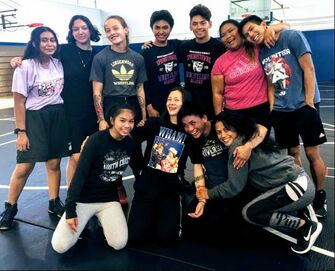 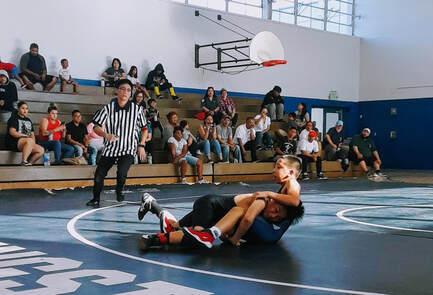 Makaio Diolanto takes down his opponent
Scores of Wildcats took to the mat for the 9th Annual Philippines Wrestling Showcase. Our Springstowne Wrestling Academy flooded the field in the middle school class, while the high school open division also brought in competitors from American Canyon and Benicia!

Our 8th Graders Display Their Travel Trip Invites
Scores of Wildcats turned out for the amazing Festival of Nations Cuisine as out 8th grade Wildcat Boys learned they will be traveling to Louisiana and our Lady Wildcats are headed to Mississippi to represent on their Wildcat Nation Travel Trips!
We also honored several supportive individuals in Alum Monica Leones '08, ESPN writer Michelle Smith-McDonald, Alum John Jackson '06 and Solano County Supervisor Monica Brown.
Leones will begin teaching at HMS this year while Jackson led Bethel HS to the school's 1st ever Wrestling League Championship. Smith-McDonald has covered our program for ESPN in the past and Brown is currently leading a campaign to bring new mats to our Springstowne Academy Wrestlers!!! 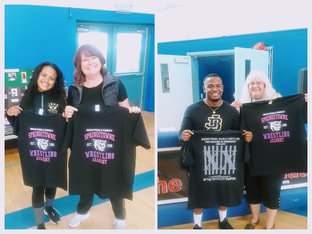 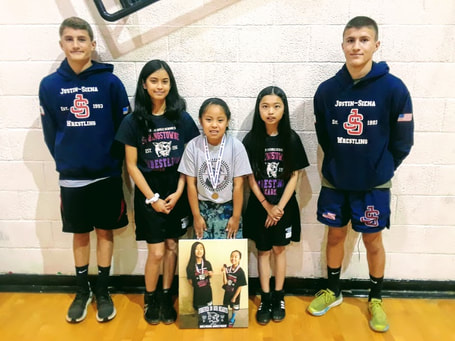 On July 17th Lady Wildcats Vy Tran and Jaedyn Strebel accompanied Coach Guiducci's Family to Shiprock, New Mexico of the Navajo Nation to put on a "Wrestling For Fun" Clinic in memory of Lady Wildcat Alums Trinh and Tram Tran!