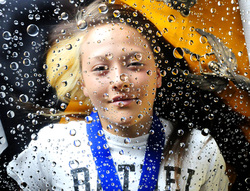 After Bethel High wrestler Alyssa Wong's sophomore year in which she placed sixth at the state meet for her weight class, Wong's mother, Cora, asked her daughter if she wanted to wrestle year-round so she could improve in the sport. Cora asked Alyssa, "Do you want to be one of the elite ones or just one of the good ones." Alyssa Wong didn't want to be either.

She wanted to be the best.

In a decision that was as much of a no-brainer as not staring directly into the sun, Wong is once again a Times-Herald Athlete of the Year nominee, largely because as far as the state of California goes, Wong was the best in her 138-pound weight class.

After finishing in third place at the state meet during her junior year that ended with Wong being named the Times-Herald's Female Athlete of the Year, Wong saved her best season for last in her senior year as she went 38-0 and defeated Merced High's Emily Hamil 3-1 in Lemoore last February to win the state title. It was Bethel High's first state champion, although the Jaguars' Maribeth Grim was also a state champion in 2003 before the CIF recognized girls' state champions.

"I was really excited when I won," Wong said of the state title. "It hit me right after my hand was raised by the referee, and I was just taken over by my emotions. My mind was racing at the time. I knew all my hard work had paid off and I knew that this was the biggest moment of my career."

conditioning and working hard for her senior year immediately after getting third place during her junior year.

"She trained all off-season for her senior year." Sariano said. "She wasn't displeased at all with finishing in third, but I'm sure she wanted to be in the finals. She wrestled at the Fargo Nationals and that helped her with her confidence. In practice she was also very focused and determined."

Wong said her confidence began to grow even more after she finished in first place in the California Junior Free Style Championship in Visalia and after she placed third at the Folkstyle National Wrestling Championships in Oklahoma City. Getting key wins against top girls in December of 2011 such as a win against Hamil, was also crucial to Wong's success.

Sariano and Wong both agreed early in the offseason that if she was going to win a state title, her biggest area of improvement would have to be in the neutral position, otherwise known as wrestling on your feet.

"I had to work on the neutral area because I wasn't as aggressive there as I was in other positions," Wong said. "Coach Sariano said I had to be more of an attacker on my feet."

After becoming the Sac-Joaquin Section Masters champion, Wong once again was faced with an opportunity to become a state champion in late February. The 18-year-old said she was a nervous wreck in the week leading up to the state tournament.

Desire Espena, Wong's teammate and fellow senior, noticed Wong behaving a little differently moments before her match against Hamil in the finals.

"I noticed she was pacing," Espena said. "Before her matches she was never nervous and she didn't really do much besides listen to her headphones. I saw her pacing and just told her, 'Look, you got this. This is all you.' "

The advice seemed to help as Wong got a quick lead on Hamill and then decided to wrestle to her strengths.

"I don't remember too much from the match because my adrenaline was running so much," Wong said, with a laugh. "I got a takedown early and after that I remember Hamil's Dad shouting that I was stalling. I was. I decided I had the lead and I was going to keep it. I wasn't going to risk anything and give my lead right back up."

Moments later, Wong's dream came true when she was crowned the state champion.

"She was so elated and happy after she won that she just jumped into my arms," Sariano said. "It was four years of high school wrestling coming to an end and all her emotions just came out. I was and am very proud of her hard work she put in."

"I hugged her really tight after she won," Espena said. "She was crying tears of joy, so I started crying as well."

Wong said it was important for her that so many people witnessed her great accomplishment, and she was especially glad Sariano was able to be there for her.

"It meant a lot that (Coach Sariano was there) because I was always trying to prove myself to him during my time at Bethel," Wong said. "He always made me want to do better. When I first started at Bethel I was just another one of his wrestlers and wasn't much of a star at all."

After her last match at Bethel, nothing could be further from the truth.

"She's definitely the best female wrestler that Bethel has ever had," Sariano said.