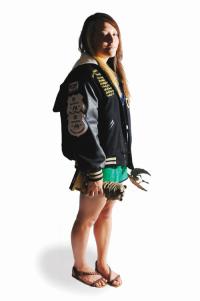 Alyssa Wong didn't know it at the time, but she made a life-changing choice as early as middle school.

Wong, a recent Bethel High graduate, and her close friend Desire Espena were debating on what extracurricular activities to engage in when Espena approached Wong and asked her if she might like to join the color guard.

"Nah," Wong said calmly, according to Espena. "But what about wrestling?"

Although Wong had never set a foot on a mat in her life, the decision was about as good as Jimi Hendrix's choice to pick up the guitar as six years later Wong is once again the Times-Herald Female Athlete of the Year.

"I was actually going to do the color guard until Alyssa convinced me to do wrestling with her, which was completely different," Espena said, with a laugh. "She told me a little about it, but she didn't know much about it herself. I think she just liked the whole idea of winning, of someone raising your hand after a win."

Over the next few years Wong's hand was raised more often than a teacher's pet in the first grade. There were a lot of great female athletes nominated for this award, whether it was Lovina Akauola and her magnificent throwing abilities with a discuss and shot put, Sarah Granato and her scoring ways on the pitch for Benicia's soccer team, Paige Reed and her performance on the court for volleyball and basketball for St. Patrick-St. Vincent, or her fellow Bruin Marisa Kaluza and her calm demeanor pitching for St. Pat's softball team.

All these athletes were great to watch, but Wong was the best of these athletes and for those who don't agree and want to argue stats we have one number to throw out -- zero. That's the number of losses Wong had her senior year as she won 38 straight matches and finished in first place at the state championships in the 138-pound weight class.

Still not convinced? We'll throw out the same number again. As far as offensive points that were scored by opponents the entire year on Wong?

Zero. None. Nada. Zilch. Nothing. She was as perfect as Matt Cain.

"She seemed to get more confident as the year went on," Bethel head wrestling coach Mike Sariano said. "She was very determined from the start, and not only was she not taken down all year, nobody got any offensive points on her."

Wong wasn't just a nominee for the area's athlete of the year, she could possibly be the entire state of California's best athlete for 2011-2012. Wong was named to the second team of the ASICS Girls All-American Wrestling Team, according to mat.com.

"Winning the athlete of the year again really means a lot," Wong said. "It means that all my hard work meant something. I don't know the words to say. I'm speechless."

Wong being speechless is a common occurrence. Although she may be Bethel's top athlete, she doesn't go around flaunting it. In fact, many people at Bethel were surprised when she won the state championship.

"After she won at state, the next day an announcer came on over the public address system and told everyone in our classrooms that she was our first state champion at Bethel for wrestling," Espena said. "Everyone in my class was in complete shock. A lot of people didn't know who she was and the others didn't seem to know she was that good."

Times-Herald Athlete of the Year nominee and Bethel football and basketball player Rodney Cook was also in that class with Espena and had a similar reaction.

"Heads were turning," Cook said, with a laugh. "I've never met (Wong), but if I were to see her now I'd bow to her and tell her what a great accomplishment that was."

Wong doesn't seem to mind the lack of praise.

"I think the school and people involved in wrestling understood what I did, and those people came up to me and told me how great of a job I did," Wong said. "But overall, people at my school didn't really know, but I'm not going to go out and tell everyone myself. I couldn't have it that way. I would feel like a jerk or something."

It wasn't that long ago that being in the spotlight not only at school was difficult for Wong, but on the mat as well.

"When I first started wrestling I wasn't sure how well I would do in large groups of people," Wong said. "My biggest fear was actually wrestling in the spotlight. It wasn't until my junior year where I was wrestling at state in the semifinals and I saw people wrestling in the raised platform that I realized how good I was. Once I did become a little more successful, I actually liked the attention."

In fact, Wong craved the ultimate spotlight after her loss at state during her junior year. Immediately she went to work with a training schedule that started with a run of 2 to 3 miles at 5 a.m. After her last class each day at school, she would run around the blacktop and do either "hills" or sprints. Then she'd go on another 2 to 3 mile run.

Oh yeah, and then she'd practice for two or three hours on the mat against one of the area's best wrestling teams.

Wong used the new confidence and training to her advantage, as she won in the highest spotlight by defeating Emily Hamil of Merced High 3-1 to win the state championship.

"I was really excited when I won and the ref raised my hand," Wong said. "I started crying as it was a really big moment for me. I was really taken over by all my emotions."

With Wong having climbed to the top of Everest, the Bethel graduate has now decided to put her wrestling career on the shelf. Wong is attending Sacramento State, where she plans to study kinesiology and someday be an athletic trainer. She won't be too far from the mat, however, as Wong also plans to help out Bethel this coming year ... as a coach.

"She had numerous offers to wrestle in college, but I think in the end, she just wanted to stay closer to home," Sariano said. "Luckily for us, she's still going to be helping our kids at Bethel, and that's great."

Wong said she's just hoping to pass some of her great experiences to others looking to get into wrestling.

"I got into the sport out of sheer curiosity," Wong said. "I'm glad I stuck with it because I made a lot of friends and had a lot of great experiences. I think the thing I'm most proud of is just sticking with it for four years and that I kept trying, a life skill lesson that won't be used just through wrestling."

Sariano has said that Wong is without a doubt, the greatest female wrestler he's ever had at Bethel.

Not bad for someone who almost joined the color guard.