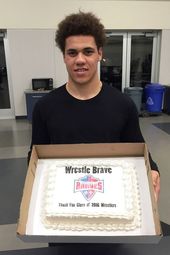 Justin-Siena 12th grader Austin Smith reveled in Senior Night on Wednesday, pinning both his Redwood and Terra Linda opponents in under a minute.
Freshman wrestler Mackenzie Gentry has been put on the spot a lot for Justin-Siena lately.
Two days after a fluke injury caused him to get pinned with a 14-point lead in the deciding match of a loss to host St. Helena wrestler at the King of the Valley Tournament, Gentry scored an 18-12 decision to give the
Braves a Marin County Athletic League home victory over 2014 league champion Terra Linda.

The three-way meet saw Justin-Siena drop a 57-16 contest to defending MCAL champion Redwood, before Gentry capped their rally from a 30-15 deficit against the Trojans. His victory left the teams tied 30-30, but the Braves had six wins to Terra Linda’s five and won by tie-breaker criteria.

“Mack scored a monumental victory tonight,” Braves head coach Jason Guiducci said. “He’s an aggressive kid I had the honor of coaching in freshman football. He scraps and battles. He looks like (San Francisco 49ers Hall of Famer) Ronnie Lott out there tackling opponents, which we attribute to his skills picked up as a defensive back for the Braves.”

Not to be outdone, 12th-grader Austin Smith reveled in Senior Night and dispatched opponents from both teams in under a minute.

“Austin has really stepped up the past few weeks wrestling up a weight class, and his physicality is turning heads in the MCAL,” Guiducci said. “He is slated to wrestle at 195 (pounds), but we’ve been utilizing him at 220s. He’s been very selfless and is willing to sacrifice for his teammates so we can fill out weight classes.”

Junior Garrett Long and freshman Jake Shaffner were each 2-0 on the night, while Cole Chapman and Wriley Sedgwick-Robles scored important wins over Terra Linda to bring back the Braves.

“Tonight was a crucial night after a demoralizing showing at the King of the Valley,” Guiducci added. “But in the face of some huge adversity facing the past two MCAL champions, the kids showed us they care about each other. Every single Brave that wrestled up in St. Helena on Monday showed up tonight. That’s what matters most and exactly why Coach Jesse Ward and I do this.”
​
Next Wednesday, the Braves are in Mill Valley against host Tamalpais and Marin Catholic.