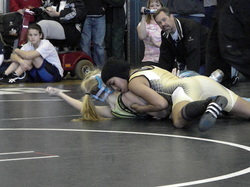 The Jaguars easily outdistanced second-place Edison of Stockton, which had 106. Bethel had 10 individuals advance to the state meet.

Hogan was sixth overall at the 69-school meet and advanced one wrestler to state. Benicia had two move on and Vallejo had one.

The top four placers in each weight class advanced to LaMoore High on Feb. 25 and 26.

The Jaguars had two individual champions: Alyssa Wong (126 pounds) and heavyweight Alyssa Balcena. Wong was 4-0, knocking off Los Banos' Mabel Flores 3-2. Flores was third in the state tournament last season. Balcena was 2-0 as she pinned Chico's Shanique Greenwade in the championship.

Seven of the 10 wrestlers have been to state before but this is the first time where the Masters tournament served as a qualifier for state.

The Jaguars had three others place at the tournament: Krajina Boyongan (138) and Amanda Avelino (154) were both fifth while Jeraleen Cimarra (189) was sixth.

Hogan had four placers. Katrina Abueg (154) was second, going 4-1 over the two-day tournament and advanced to state.

A day earlier, Vallejo sophomore Veronica Chong went 3-1 and moved on to state.