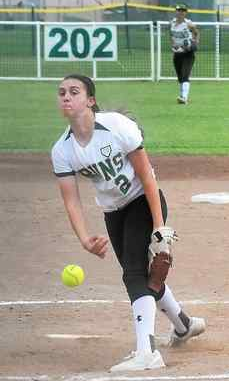 “For the seniors, it will be the third time they’ve played in the game in four years, so they’ve seen it,” St. Pat’s head coach Rich Gigliotti said. “The team is still going to have a little bit of nerves in the game and I don’t see having nerves as negative necessarily. You want to be on the edge a little so your concentration goes up. But I’m really proud of this team. No matter what, this will be our last game on Saturday. If we win, you wake up feeling a little better on Sunday, but if you lose, you still feel good. Either way it’s been a good season.”
St. Pat’s finished second in the Tri-County Athletic League this season but have caught fire lately as the Bruins haven’t lost a game in nearly a month (May 6). After a two-week break St. Pat’s got healthy and for the first time the Bruins were fielding their entire squad. The result has been five wins in a row with the team averaging 11 runs a game.

“I think that’s been it for us,” Gigliotti said. “You take one or two girls out the lineup and out of their slot and everything changes. Now players are healthy and are in their comfortable slots and that seems to have helped. We’ve spent a lot of time doing live hitting in practice and it seems like everyone on the team have had better at bats.”

One of the strongest hitters lately for the Bruins has been Boursaw. Boursaw has hit a home run in all three playoff games, including a vital three-run shot to give St. Pat’s the lead over Cardinal Newman, and a two-homer game this week in a semifinals win against Fortuna. On the season Boursaw has 13 home runs and 12 doubles to go with her 51 RBIs.

“You know she just keeps getting better,” the Bruins head coach said. “Ever since her freshman year she just keeps getting better. And right now, she’s hitting the best she’s ever hit. That’s good to see. She’s really squaring up to the ball real well. In the last game she hit into a double play, but only because she hit the ball so hard. She’s been consistent for us all year.”

Boursaw said she’s just trying to make solid contact when she goes up the plate.
“I don’t know why I have been doing so well lately, I’ve just been taking it one pitch at a time,” Boursaw said. “If I see a pitch I like I’m just trying to put it in play but I’m not really trying to hit home runs.”
The senior slugger will have the best seat in the house on Saturday as she handles the catching duties when St. Pat’s starter Cecily Kaluza is in the pitching circle. The senior hurler is 3-0 in the postseason and has thrown three complete games.

“She’s been able to adjust to hitters really well and throw whatever I call for her,” Boursaw said. “She’s been working her riseball and changeup well and even her screwball. Her screwball isn’t one of her best pitches normally but she’s definitely been using it more recently because it’s been working well.”
Going up against Kaluza pitching-wise will most likely by Carly Slack, who has thrown well this year with a 16-2 record and 1.56 ERA. She has 16 complete games this year.
​
“We didn’t face Marin Catholic last year and we didn’t have time to schedule them in this year, but we faced them and (Slack) two years ago,” Gigliotti said. “She’s good. I think we beat her but she wasn’t at full strength. She has a good riseball and we will have to lay off of it and make her throw strikes. If we do that and we don’t give up too many walks and play good defense, we should be OK.”
ABOUT THE AUTHOR

Been working at the Times-Herald full time since early 2011, was a stringer from 2001-2004 while in college at San Francisco State where I studied Journalism. Have worked as a copy editor and sportswriter since 2011. Fan of Dodgers, Angels, Lakers, Kings and Raiders. Reach the author attgase@timesheraldonline.com or follow Thomas on Twitter: @tgasevth.