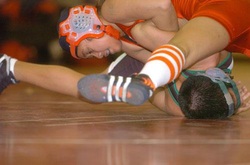 STOCKTON - There was the guy who shredded paper rankings and threw them out the door, the guy who experienced redemption after a year of suffering, the guy who lived on the edge all day long, and the guy who stayed on course.

And then there was the girl yes, the girl - who made history.

Indeed, day one of the Sac-Joaquin Section Masters meet was filled with intrigue, as seven area wrestlers kept their hopes alive on Thursday at University of the Pacific.

Hogan High's Justin Azarias (125) and Stuart Yocum (140) and Bethel's Matt Gibson (215) and Devin "Chop" Bryant (275) assured themselves a spot at the state meet by going 3-0 and advancing to today's semifinals.

Hogan's Terry Allen (112) and Ray Hoover (145) and Bethel's DeVaughn Frazier (189) lost their quarterfinal matches but remain in contention in the consolation bracket after each posted a 2-1 record.

Azarias, ranked seventh in the section, defeated No. 3 Vince Waldhauser of Oak Ridge-El Dorado Hills by a 16-6 major decision in the quarterfinals, earning himself a match with top-seed and the state's No. 1 ranked Kody Klaus of Vacaville.

Much like the first day and beating a higher seed, Azarias could care less about squaring off against the state's best.

"When  you step on the mat, rankings go away," Azarias said. "You go out there and wrestle how you wrestle and how you were taught."

Added Spartans coach Ric Manibusan: "He's focused. He's making sure that the paper champion doesn't even mean a thing to him."

When Yocum defeated Franklin-Elk Grove's Matt Rau by major decision 13-4 and assured himself a spot at state, a semblance - and only a semblance - of satisfaction set in.

It was just last year that Yocum missed out on wrestling due to academic ineligibility. Once that happened, he made a decision to turn things around.

"When I didn't make it and didn't wrestle the whole last year," Yocum said, "it just killed me. So I just said after I couldn't wrestle anymore that I was going to make a statement. 'I'm going to state, I want to be a state champion, that's my goal.' I'm not quitting. I can't give up."

As for Bryant, he flirted with disaster all day winning his first two matches in overtime and then narrowly defeating Major Surrell of Sierra Ridge-San Andreas 4-3 in the quarterfinals.

"From the moment I woke up I was focused," Bryant said. "I just wanted to win three matches, make sure that I went to state. I didn't care who (my opponents) were, what kind of shape they were in, if they were ranked or not. I went out there, and I accomplished it one match at a time like I wanted to do."

It was business as usual for Gibson, the state's No. 3 ranked wrestler at 215. Gibson pinned his first two opponents before defeating Elliot Lowry of Colfax by technical fall 17-1.

Gibson, who took fourth at state last year at 189, said he was pleased for the most part with the way he wrestled but is aware of the challenge ahead of him as he'll take on Ponderosa's Dominic DeMarco, the state's No. 2 wrestler, in the semifinals. Should he win it's likely the state's top-ranked 215-pounder, Rudi Burtschi of Oakdale, would await in the finals.

"It gets a lot tougher now," Gibson said. "But I'm just going to focus, have fun and relax - don't be so uptight."

The historical aspect of the tournament was about Vallejo's Jennifer Fernandez, who went 1-2 on the day and became the first girl to win a Masters meet match when she defeated Dalton Richardson of Placer-Auburn 3-0.

"I really, really wanted to (make the second day)," Fernandez said. "I feel good that I made it far, but I wanted to go further."

The only girl present in a singlet and wrestling shoes, Fernandez admitted that she didn't quite feel right being around all the guys.

"I felt awkward in the staging area," Fernandez said. "In staging I kept getting looks from the guys like 'Is she really here to wrestle? Or is she here to just watch us?' And I felt awkward."

People took notice, though, of what the girl was doing.

"All these state placers, guys that are coaches now," Lastrella said, "they're saying 'Hey, great job Jennifer, way to fight.' That's good in my book. I'm so proud of her."

By the end of the day, after she lost her final match, Fernandez felt differently.

"I feel better to know that I got here, and I won a match," Fernandez said. "I feel a little bit now like I belong here."

Asked whether or not her groundbreaking achievement would do something for girls wrestling - which the CIF is yet to sanction with a state tournament - Fernandez had a simple answer.