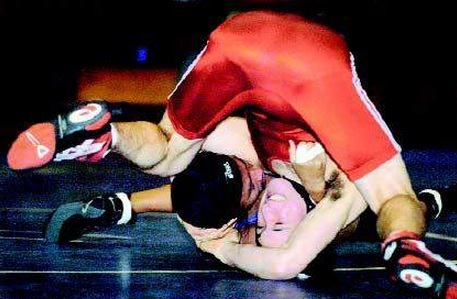 Vallejo's Adam Fuentes (red) is in a bit of trouble in his 130-pound match against Hogan's Justin Azarias. Fuentes was pinned near the end of the first period. Photo: J.L. Sousa/Times-Herald

"I've never beaten coach Minahen," Manibusan said minutes after Quincy Nesmith won the night's final match to provide the 44-19 final score. "It's been a goal of mine. I can't express how I feel right now."

On a night when most of America had its attention turned toward the Rose Bowl, the blue portion of Grove Gym seemed entirely focused on the end of its own streak, joining the Hogan wrestlers on the mat for a jumping, screaming celebration.

The clinching victory belonged to the senior Ortiz, a girls' All-American as a junior and the first-string 112-pounder for the Hogan boys. She was a few inches shorter but more muscular than her Vallejo opponent, sophomore Brandon Boggs, who was taken down 13 seconds into the match and pinned in 62 seconds.

Ortiz, who wasn't even born when the Spartans last beat the Apaches, was well aware of the streak.

"Every year, we should have beaten Vallejo," she said. "But this is definitely the year to do it. We have a really good team."

Minahen was a first-year assistant in 1986, and was surprised that it's taken this long for the Apaches to lose again.

"Almost half the time, I thought they were better than us," he said. "This is not a shock by any stretch of the imagination. We kinda knew coming into tonight that this was about going to be the outcome."

Hogan's ﻿﻿Justin Azarias﻿﻿ won the first match of the evening, a pin in 1:57 against Adam Fuentes. In a matchup of two of the section's best 135-pounders, Vallejo's Ronnie Tsutsui Jr. held off Stuart Yocum on points, 7-4.

At 145 pounds, Ray Hoover took a close match for Hogan over Devin Fernandez, 9-7, before Vallejo's Robert Hansen battled Damian Neves to a 13-7 win. Steve Swaby, fresh off a sixth-place finish at the five-state Sierra Nevada Classic, then grabbed a strong 8-1 win over Nico Sanchez at 152 pounds to tie the match at 9-9.

Over the next two matches, J.R. Bayongan won on points, and Josh Adkins on a pin, to put Vallejo up 19-9. But the Apaches would not win another match all night. Derek Young (189 pounds) notched a 6-4 win over Virgil Narvaza and heavyweight Aaron Stevenson pulled off a last-second pin to beat Marc Ramirez.

Marvin Mora's technical-fall win at 103 pounds put Hogan up 29-19 and put Ortiz in position to clinch.

"Every time I expect to win, coach Minahen has something up his sleeve," Manibusan said. "These guys all did their individual job, keeping their game plan ... team-wise, it is the best team I've had."