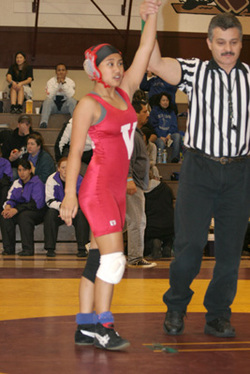 ATHLETE of the WEEK: Jennifer Fernandez

The Vallejo High sophomore may not break the century mark on a bathroom scale, but as of Saturday, she's the best female wrestler in the state. In the two-day California state championship tournament in Hanford, Fernandez went 5-0 with one pin to earn first place in the 98-pound weight class.

Her effort wasn't unique so much for the fact that she won a state title - the Apaches' Lauren Knight (138 pounds) and Monica Gonzalez (158) also won their divisions - as for how she did it.

In order to make it to the championship match, she had to get through last year's state runner-up, Gabby Solis, who she'd wrestled several times before but never beaten. In the finals, she took on defending state champion Michelle Jimenez - who she'd also never beaten - and overcame a huge first-round deficit to win on points, 12-8.

"It was one of the most amazing comebacks against one of the best opponents in the state," Vallejo coach Mike Minahen said on Monday. "It's the best comeback I've seen. Sometimes you see a kid make a comeback, but not at that level."

The match started out terribly for Fernandez, as Jimenez took her down to the mat immediately and almost pinned her. Jimenez completely dominated the first round and got out to an 8-0 lead, causing Minahen to have flashbacks of a bout two weeks earlier in which Fernandez lost to Jimenez 15-0 in just over two minutes.

But Fernandez got to start the second round on her feet, and within 15 seconds, she had her opponent on the ground and kept her on her back until the whistle blew. Still trailing 8-6, Fernandez came out for the third round and did exactly the same thing, putting the defending champ on her back right away and not letting up until the end.

The match might have been won in the third round, but Minahen said the second was the one that really decided things.

"After that round, Jimenez got up with tears in her eyes and rubbing her shoulder," Minahen said. "She obviously had been physically dominated ... after being put on her back twice, she really didn't want to wrestle that third round."

Although she'd never beaten either of the opponents she faced on Saturday, Fernandez said she came out for her first match against Solis believing it could be her turn this time. And in getting that first win, she finally proved to herself that she could compete on the same level as the state's elite wrestlers.

"The first win, it made me more confident in beating Jimenez. I'd been going 0-6 against Gabby, and it just changed everything," she said. "Right when I pinned her down with a 'cement mixer,' I just felt like I had a chance at this, and going into my finals match, that just helped me focus more."

For most of the meet, matches take place on several mats around the gym. But only one mat is used for the finals, and the bouts happen one at a time, with every other wrestler in the tournament watching. When Fernandez pulled off her comeback, Minahen said, hardly anyone could believe what they were seeing.

"The gym was almost silent and stunned," he said. "Except for the Vallejo High contingent and the Hogan contingent, who were going crazy."

As a sophomore, Fernandez still has two more years to compete - and since both Solis and Jimenez are underclassmen as well, a pair of developing rivalries may be on her hands unless someone changes weight classes. And now, she can set her sights on nationals - and maybe someday winning at a permanent, official state championship meet sponsored by the California Interscholastic Federation.

For the time being, such a meet doesn't exist, but becoming the state champion is no small feat, considering the growing number of girls who participate in wrestling. Fernandez would like to see the sport keep growing so that more people will become aware of what she and her teammates have worked to build.

"Most of my friends congratulated me, and most of my teachers said 'Good job,' " she said. "But most people are like, 'You're just 98 pounds. How could you win state?' "

In this case, by beating the best.