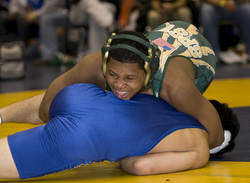 At some point this season,  St. Patrick-St. Vincent High's Magi Frazier will be challenged.

For now, the senior has been on cruise control.

Frazier is 23-0 after a first-place finish during the Apple Cider Invitational at Watsonville High on Saturday. The 152-pounder picked up four pinfall victories and was named the meet's outstanding wrestler. He pinned Ryan Brewer of Morgan Hill's Sobrato High in the championship match.

"I've gotten a ton of mat time and I know what I want to do this year," Frazier said. "Last year was more of a learning experience."

First-year coach Andrew Altman has 60 to 70 pounds on Frazier but is no match for him at practice.

"(Magi) has great technique and great flexibility but what makes the difference is the amount of work he's put in," Altman said. "He wrestles year-around and puts the work in year-around. He's really been unmatched this year."

The 23-year-old Altman took over for Bob Gonzalez this year and was pleased to inherit a wrestler like Frazier.

"He's a good guy and he cares about us," Frazier said about his coach. "He's not intimidating and we feel like we can talk to him if we have a problem."

Frazier comes from a family with plenty of wrestling ties. His father competed at Vallejo High School and his brother, DeVaughn, was a standout wrestler at Bethel High. DeVaughn Frazier  graduated in 2008 and attends San Francisco State.

"My brother came out and helped me in the past," Magi said. "We'd roll around in the summer a little bit and he'd help me get better."

Magi began wrestling in sixth grade for Springstowne Middle School, where he got a "good foundation and start" in the sport.

He said he would like to wrestle in college but hasn't had any scholarship offers yet. He hopes with a strong finish and a trip to state, that will change.

Altman said he saw some Division I wrestling teams come through San Francisco State when he was a student.

"I can tell you -- Magi could put some hurt on some of those guys right now," Altman said.

Frazier plays left field for the St. Pat's baseball team in the spring, as well. He hit .424 with 11 RBIs in 33 at-bats last season.

But he figures to make a name for himself this winter.

"Honestly, he hasn't been challenged yet this year," Altman said. "He pretty much does what he wants on the mat."