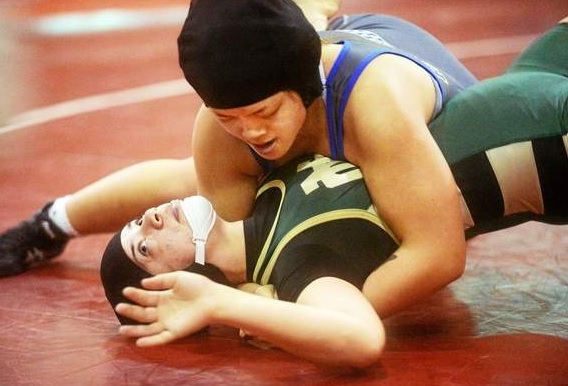 After a year of hard work, everything was finally worth the wait for Benicia High senior wrestler Ricki Liang.

Almost a year to the day after then-Bethel High’s Liang came in second place at the CIF state tournament, the 121-pound grappler finally got her state title on Saturday when she defeated Daishea Jaime of San Dimas 2-0 in Visalia.

“It was definitely a thrill when I won,” Liang said. “It’s the pinnacle of high school wrestling.”

With the win, Liang is the Times-Herald’s Athlete of the Week.

Last season Liang wrestled in the 116-pound weight class, but lost to Dominique Parrish of Scott’s Valley. Liang was disappointed, but she also knew she had to work hard to get back to the top for a chance to wrestle in the finals again. She switched some things up, including her school as she transferred from Bethel to Benicia for her senior season. This meant that Liang could not compete in a high school wrestling match until Jan. 1.

“It was pretty tough to not be able to wrestle for that long, but knowing that I would now have good coaches to help me made it all worth it,” Liang said. “Coach Craig Holden and the other coaches did a good job with me the whole season. If I had moments where I doubted myself, they would always tell me that nobody was better than me and nobody trained better than I did.”

All the training finally paid off as Liang set foot again on the mat for the finals. Liang knew her opponent, Jaime, from their time together on the national team.

“I texted her before the tournament and I found out that she was ranked No. 2 in the state (Liang was No. 1),” Liang said. “I knew that she was a very good defensive wrestler and that I would have to secure a lead early if I faced her.”

Prior to the match Liang went through all her normal routines, with a slight altercation.

“When it came closer to the finals I would begin earlier and would take my routines a little more seriously,” Liang said. “I listen to music, jump around and I close my eyes. It must look a little weird to see someone with their eyes closed, but I’m just visualizing what I want to do.”

Liang got a 2-0 lead in the first period after scrambling for a takedown but that would be all the scoring for the match. When the second period began, Liang would open it in the top position, as Jaime wrestled very well in the bottom position.

The score remained the same heading to the final period. With a state title very close at this point, Liang decided to not try anything abnormal.

“I tried to take a bigger lead than 2-0 in the second period with reversal’s, but she was a very good wrestler,” the 17-year-old Liang said. “With a 2-0 lead in the third period I wasn’t going to try any desperation moves.”

When the final second ticked off and Liang had won her championship, the Panther grappler said she felt, “amazing.”

“I just smiled and went over to my coaches and said, ‘We did it!’ Liang said. “It’s not just one wrestler that does this; it’s myself and the coaches that put in the time. It didn’t feel that different to get first place, but I was very happy. I was smiling and laughing a lot afterwards.”

• Mason Boutain, Joe Hurst, Fernando Lanza, Lysander Mahilum and Christian Ramos, Benicia High boys wrestling. All five wrestlers for the Panthers qualified for the state championship over the weekend at the Masters. Boutain, Hurst and Ramos came in second place at Masters.

• Jabbar Brown, Vallejo boys basketball. Brown had 20 points in a playoff win over Florin. He also had 24 points in a loss to Sierra.

• Tavian Henderson, St. Pat’s boys basketball. Henderson had 36 points in a Wednesday playoff win over Gateway of San Francisco, followed with 29 points in a home win over McKinleyville on Saturday.

• Jimmy Hoang, AmCan boys wrestling. Hoang advanced to the state tournament by finishing in fifth place at the Masters in the 145-pound division.