Benicia wrestler Shelly Avelino is Athlete of the Week 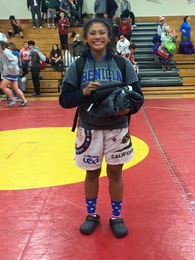 Often people will say that you can tell a lot about someone’s character from his or her handshake.

On Saturday, Benicia High’s Shelly Avelino could tell from someone’s else handshake that it wouldn’t be long until the Panthers junior was the best wrestler in the building.

Avelino, the No. 1-ranked girls wrestler in the 131-pound division according to thecaliforniawrestler.com, defeated Kiah Martin from Eureka in the championship match at the 18th annual True Wrestler Napa Valley Girls Classic.

Avelino won by pin in less than a minute, but the 16-year-old said she knew she was going to win before the clock began running.

“In the faceoff we shook hands and I said, ‘Good luck,’” Avelino said. “When she shook my hand though she didn’t smile. She kind of looked at me with a deer-in-the-headlights look. I didn’t think I had the match won right there, but it gave me a lot of confidence and put me in the right mindset.”

At the tournament there were approximately 500 wrestlers, but as they say in the movie “Highlander”, in the end, there can only be one. On Saturday it was Avelino, who won the tournament’s Most Outstanding Wrestler award.

She is also the Times-Herald’s Athlete of the Week.

Avelino said that going to the state championships last year in Visalia helped her drown out the pressure of competing at such a big event like the one this past week at Vintage High.

“A girl on the team came up to me and told me there was over 400 wrestlers there,” Avelino said. “I was pretty nervous, but not as nervous as I’ve been before. You have to tell yourself that it’s just like any other tournament.”

In the semifinals Avelino won by pin in the second period, which set her up for the championship match against Martin.

“I didn’t know anything about (Martin) going into the match,” Avelino said. “Someone said she had done well at state last year in another weight class, but I didn’t know about her. I just told myself to do what I do and wrestle how I usually wrestle. I shot in on her and went for a straight finish and it was over pretty quickly. I was pretty excited because Coach (Craig) Holden told me I was the first Benicia wrestler to win at the tournament. There had been a bunch of people in the finals, but never a winner.”

Avelino said it finally hit her two days later on Monday how well she did by becoming the top wrestler at the tournament, but she admitted she has a long way to go before reaching her ultimate goal — a state championship. Last season Avelino placed fifth at state.

“Yeah I can’t just settle on this; it’s just one tournament,” Avelino said. “My number one, long-term goal is to win a state championship.”

Last week Benicia coach Craig Holden talked about Avelino’s drive to be the best at the end of the season.

“Shelly is hungry this year. She’s hungry to win state,” Holden said. “She brings the match to her opponent. She doesn’t wait for her opponent to do anything. She’s the enforcer in her matches.”
Avelino says she appreciates how Holden helps her constantly on and off the mat.

“He keeps me in a positive mindset and always says, ‘Let’s just have fun,’” Avelino said. “He doesn’t say, ‘We have to win and da da da and all that.’”

Forrest Molinari and Ricki Liang. Now, she often talks to the two of them by phone or text. She also learned from the two of them how to be a leader on the Benicia squad.

“The one thing I learned is you always have to be positive around the other wrestlers,” Avelino said. “Even when you aren’t feeling great. There were times I’m sure when Ricki might have been feeling bad but she was always there to cheer me up. She was like a big sister to me, but now, I’m the big sister here.”

From what Avelino proved this past weekend on the mat, she’s basically everyone’s big sister.

• Mason Boutain, Benicia boys wrestling. Boutain won the 152-pound weight division at the Joe Rios Memorial tournament in Chico and was named “Champion of Champions” of the tournament.
• Tavian Henderson, St. Pat’s boys basketball. Henderson helped lead the Bruins to three wins during the week. He scored 19 points in a win over McKinleyville on Friday.
• Gamon Howard, American Canyon boys basketball. Howard had 22 points, 10 rebounds, seven assists and three steals in a win over Pinole Valley.
• Irfaan Jaleel, Vallejo wrestling. Jaleel placed second in his weight class at the El Camino Invitational over the weekend.
• Wanna Wong, St. Pat’s girls basketball. Wong had 20 points and seven rebounds in a win over Gateway on Saturday.