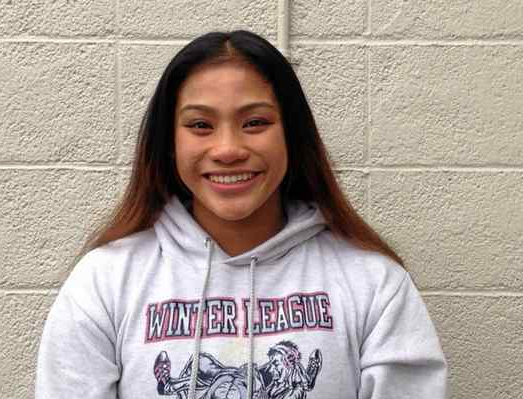 Shelly Avelino of Benicia High School is athlete of the week
By Matt O’Donnell, modonnell@timesheraldonline.com, @modonnellvth on Twitter
POSTED: 02/06/17, 7:47 PM PST | UPDATED: 1 WEEK, 6 DAYS AGO
0 COMMENTS
Former Benicia High School female wrestlers like Ricki Liang, Forrest Molinari and Alyssa Gonzalez helped put their school on the map in recent seasons after doing well at the Sac-Joaquin Section and CIF State Championship levels.
​
Senior Shelly Avelino could be mentioned in that class as well.

Avelino did nothing to dispel that notion after finishing first in the 137-pound division at the 77-school Sac-Joaquin Section Regionals at Natomas High School on Saturday. She pinned defending state champ Kaleigh Burrage in the second period in the final match to go 4-0.

She is the Times-Herald Athlete of the Week.

“I think my routine that I did in the morning leading up to that day (helped),” Avelino said at practice on Monday afternoon. “During the week, I practiced really hard.”

Avelino and Burrage are 2-2 on the season as Avelino beat her early in the year before Burrage won the next two, coach Craig Holden said.

“Every other match had been like 6-4 or 7-3 but Shelly really turned it on this time and got the pin,” Holden said.
Avelino, 17, wrestled at 131 pounds for most of her junior season but eventually settled in at 137s.
Despite being pleased with the title, Avelino did not feel like she was making a statement.

“For me, it was just another tournament,” she said. “I don’t think any tournament is that big unless it’s state.”
Avelino has had good competition in practice from teammate Tara Othman, who did well herself at regionals with a second-place finish at 116 pounds. Avelino said both wrestlers try to keep one another prepared on a day-to-day basis at practice.

“She’s a good partner mentally,” Avelino said. “I will come in and have a bad day and she will tell me to put that aside and just wrestle well right now.”
Avelino could face Burrage again at the Masters tournament in two weeks. Burrage was ranked No. 2 at 137s with Jenna Garcia of Notre Dame of Salinas the top-ranked wrestler, according to thecaliforniawrestler.com web site.

Holden and Avelino both said the biggest improvement has been her mental game.
“Her confidence is probably her biggest improvement, just her ability to relax,” Holden said. “I also think she has re-fined all of her moves a little bit.”

The first-place finish at regionals might be good for her future plans. A coach from Campbellsville University in Kentucky called her Monday morning before school. Avelino said she is also considering King University in Tennessee (where Molanari wrestles) along with Menlo College in the Bay Area.

• George Binda (Vallejo boys soccer) had a hat trick in the Redhawks’ win over Fairfield.
• Adrienne Dominguez and Nikki Mae Sumagang (American Canyon girls wrestling) each won championships at the Sac-Joaquin Section regionals at Natomas High.
• Alejandro Fernandez (Bethel boys soccer) had the game-winning goal in a 1-0 win over American Canyon as the Jaguars moved into a first-place tie. He also had a goal in a win over Fairfield.
• Tyree Hornbeck (St. Pat’s boys soccer) had three goals as the Bruins beat John Swett 10-0 in the Tri-County Athletic League playoffs.
• Ana Herrera (American Canyon girls soccer) had four goals and two assists in an 8-0 win over Bethel.
• Marquel Johnson (St. Pat’s boys basketball) scored 33 points and hit nine 3-pointers in a win over St. Mary’s. He scored 12 more in a win over El Cerrito.
• Krystle King (Vallejo girls basketball) scored 17 points in a win over Fairfield as the Redhawks swept the Falcons.
• Tara Othman (Benicia wrestling) took second at 116s at the section’s regional meet at Natomas.
• Trey Pugh (Benicia boys basketball) scored 33 points as the Panthers beat American Canyon in a showdown.
• Robyn Rowley (Benicia girls soccer) had the lone goal in a 1-0 win over Vanden as the Panthers handed the Vikings their first league defeat.
• Ashmeen Sran (St. Pat’s girls basketball) had 18 points in a loss to Salesian and led St. Pat’s with 22 points in a win over Hercules.