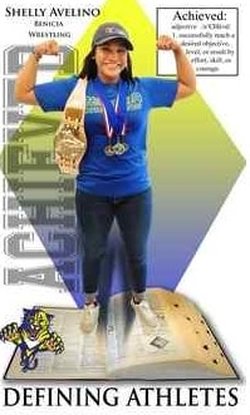 ​Ever since Shelly Avelino began wrestling she’s received plenty of accolades. By the time she was in the sixth grade she said she had at least 70 trophies and medals.

After that point and well into her time as a grappler at Benicia High that would eventually feature 105 wins, she lost count on the number of awards. Her trophy case had more bling and sparkle than Davy Jones’ treasure chest.
That being said, Avelino knew there was still one award she had yet to attain — a first-place medal for winning at the CIF state wrestling championships.
Avelino took fifth place in the state tournament during her sophomore and junior years. Those results would have been fine with most top wrestlers, but it wasn’t good enough for Avelino.

“When I got fifth place my junior year I wasn’t disappointed, but I knew I didn’t work hard enough,” Avelino said. “I knew I could have done better.”

The Benicia grappler did just that in her senior year, as she trained rigorously and more than ever to achieve her goal. In February she accomplished her dream of becoming a state champion and grabbing that elusive medal when she defeated Westminister’s Aine Drury by pin in the second round in the 137-pound division.
Avelino is a Times-Herald Female Athlete of the Year candidate.

In the offseason between her junior and senior years Avelino said her mindset changed.

“All of a sudden I’m in my last year and I know that I’m going to be graduating soon,” Avelino said. “I’m the oldest one on the team, so I have to be better than everyone else in my mind. I fed off that the whole season.”
The 18-year-old also ran more to stay in shape and worked on perfecting her bread-and-better move — the arm bar.

“I think everyone has known forever that is my best move,” Avelino said, with a laugh. “If you see all the pictures of when I win matches you can see my using that move and the opponent’s arm’s being torn away. Some people know that is my best move and when that happens I have to go to something else.”

Before she knew it, Avelino was in the state tournament again. She would go 2-0 in Bakerfield on Friday night to move into the semifinals the next day. She defeated Mikayla Niles of Nordhoff and all of sudden her dream of winning the title was just one win away.

The Panther had to wait nearly seven hours before the final match, but in that time she stuck to the routine that got her to where she was.

“I kind of jumped around and paced back and forth watching some of the other matches, but then I went into my routine,” Avelino said. “It’s very strict. I take off my pants to be in just my singlet, but the pants have to then be folded perfectly. I take off the shirt above the singlet, but that also needs to be folded perfectly in two. I have to organize my backpack, water bottle, everything needs to look perfect and then I’ll listen to my music and put my headgear on.”

Avelino’s pregame ritual was perfect, but her match against Drury was even better. After struggling in the first round, Avelino made her winning move in the second round.

“It was funny, before the second round I really wanted to choose to go on top to start the round, but my coaches wanted me to go on bottom,” Avelino said. “I asked, ‘Are you sure?’ But they were convinced I’d be able to get out. I got her over and then popped out behind her. After that I had her in the position I wanted and made my move.”

When asked about the decision to go on bottom to start the second period, Benicia coach Craig Holden downplayed the advice.

“We felt she can’t be held down by anyone,” Holden said. “We just felt nobody was going to turn Shelly and put her on her back. As soon as the other girl (Drury) was in a spot that was uncomfortable it was going to be all over. But I’m not sure coaching was the reason she was in that spot. Yeah it makes me and the other coaches look good, but it’s probably 99.9999 percent had to do with Shelly wrestling and the rest had to do with the coaching. Coaching is overrated when you have Shelly Avelino and her arm bar.”

Seconds later, Avelino had the position she wanted, and moments later the pin that gave her the state title.
“When the ref first said I had the pin, I kind of froze,” Avelino said. “In that second I froze I kind of told myself, ‘Oh yeah, I just did it.’Then I went crazy. I even cried a little after. I felt like I worked so hard and that because I worked so hard this (the title) was something I deserved. I wasn’t like it was something I just walked into. I worked hard for this.”

A few moments later Avelino was leaping into her coaches arms, not just Holden, but other coaches from Benicia as well as Vallejo PAL.

“I told her that I was proud of her and that nobody deserved to be on that podium more than her,” Holden said. “I told her how fun it had been to watch her wrestle.”

Avelino will now wrestle in college at Menlo College in Atherton, and Holden said he can’t wait to follow the rest of her career.

“I’m proud of her and her hard work,” the Benicia coach said. “She had an unbelievable run and was an unbelievable athlete. She just had so many friends inside that gym all those years. She was like a sponge, always learning stuff. Off the mat she was one of your best friends. On the mat, she was your worst nightmare.” 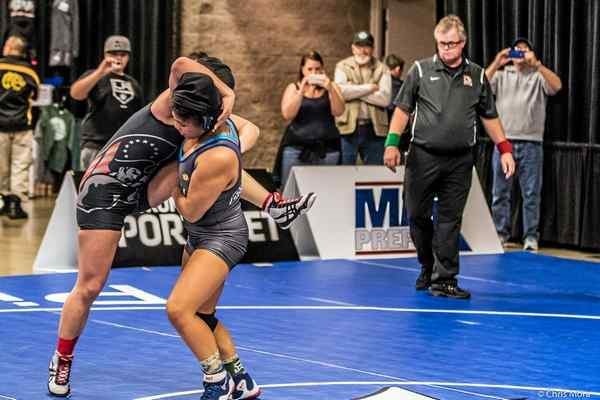 Benicia High School’s Shelly Avelino took fifth in the state tournament her sophomore and junior seasons before winning it all in 2017. CONTRIBUTED PHOTO