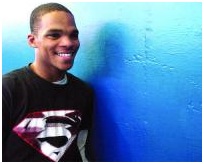 It's not like Hogan High's Terry Allen is lacking in motivation. But when a slight mistake cost him a Masters title last week, the 119-pounder took with him all the motivation he needs.

In the 119 Masters final, Allen scored a takedown against his Turlock's Fabian Garcia. In going for the pin, Allen allowed Garcia to get loose. The eventual champ then pinned Allen in the first round.

"After that first takedown, I had him in the cradle," Allen said. "He just caught me. I'm still a little shocked right now that he pinned me. But that's what happened."

Of the loss in the Masters final, even tough Allen said he's still a little surprised but that he's going to put it behind him as the state championships get underway in Bakersfield.

"I'm disappointed. It just pushed me to make me even more motivated going into state," Allen said. "I already knew I'd be giving it my all and not leaving with any regrets."

Allen enters today's competition with a 39-2 record. He'll have Matt Fregoso, of Rosemead, up first. Awaiting the winner with a first-round bye will be Exter's Jason Gagnon.

Hogan coach Ric Manibusan expects that Allen will face unfamiliar foes while at state. He adds that there's two sides to that coin.

"I expect that, but there's also a lot of teams  that haven't seen Terry," Manibusan said. "That's our big advantage. There's still a disadvantage (that we haven't seen many of the other wrestlers), but the pros and cons kind of balance out."

The coach added that there will be no new strategy going into the season's final competition.

"We're going to stick with what we've been doing," Manibusan said. "We're not going to try to fix up something that's not broken."

Allen spent the week preparing for the tournament with several teammates whose seasons are already over. Had it not been for their willingness to put in extra work, Allen would have been in the wrestling room at Hogan all by himself this week.

The preparations, Allen said, have been vital.

"It's hard being the only guy left from your school," Allen said. "There's more pressure on you. But my teammates have been here pushing me to work harder, and that's helped a lot. I'm happy that they came back. I guess they believe in me that I can do it, that I can place. I don't want to let them down."

With last year's trip to state under his belt, Allen knows what to expect from the tournament. He's also not going for fun or just to get the experience. There's only one thing on the Hogan senior's mind.

"My goal last year was just to make it to state," Allen said. "This year, I expect to be on the podium. I'm going into it with a different perspective. I am looking forward to it ... but not really for anything other than just going there to wrestle. I am going to have fun, but I'm just there to wrestle."

Terry Allen was as calm as can be Friday night.

The same couldn't be said for his coach.

And Manibusan wasn't even in Bakersfield to see his senior 119-pounder win four matches at the CIF state tournament and advance to today's semifinal matches.

Instead, Manibusan was home in Vallejo. He'll head down to Bakersfield today.

But while the coach was celebrating, Allen was just concentrating on his goal of becoming a state champion today.

"My goal is to become a state champion," Allen said over the phone. "I am just on my way to accomplishing one of my goals."

Allen's road gets nearly impossible when the tournament resumes at 9 a.m. today at Rabobank Arena. He'll have to take on defending state champion David Klingsheim of Liberty High.

Allen lost to Klingsheim last year as a junior, and wants his revenge today.

"This year is different," Allen said. "There is something in me that makes me want to beat him this year."

Allen can finish no worse that sixth, meaning he has already clinched All-State honors. His four state wins mark what is most likely his best day as a wrestler so far.

"I'm pretty sure no one has really seen him," Manibusan said. "So I am guessing they kind of underestimated Terry's will and ability."

Allen began the tournament by pinning Matt Fregoso of Rosemead. Next came a decision over Exeter's Jason Gagnon.

Then the fun began. Allen got a 5-3 win over Chris Martinez of Clovis West, the sixth-ranked wrestler in the bracket.

The final win was an 8-4 decision over No. 5 Chad Thornock of San Jacinto.

"I just wrestled my game plan. We

didn't change nothing," Allen said. "We stuck with the basics and things like that. Just wrestling smart and wrestling my match and not theirs."

Though he'll be the underdog against Klingsheim today, Allen said he's not worried.

"I'm not thinking about the name," Allen said. "Name doesn't mean anything."

Meanwhile, Vallejo High's pair of entries flamed out in the first day. Ronald Miranda went 1-2 at 112 pounds, getting an overtime win.

A tough near fall call hurt heavyweight Dimitrius Berry's chances of moving on, as the senior dropped two straight matches.

"We kind of got shafted on a near fall call, four points," said Vallejo coach Carl Lastrella. "But we need to know how to score in that situation. As hard as that kid works its bad to see that officiating can get in the way sometimes. It happens, but had we taken care of business.... it is what it is. I am proud of these guys. They had a goal to be one of the top 40 wrestlers in their weight class in the state of California, and they did it."

Hogan High's Terry Allen is going out on top.

The Spartans' 119-pounder pinned Turlock's Fabian Garcia in the second round to clinch third place in the CIF state wrestling tournament at Bakersfield's Rabobank Arena on Saturday.

"I'm happy and excited," said Allen, who earned All-State honors. "I'm still surprised. It hasn't hit me yet that I finished third. Just knowing that I placed ... I'm speechless."

The victory was a measure of revenge for Allen, who lost to Garcia in the Sac-Joaquin Section tournament final.

Allen cruised through the first day of state competition, but defending state champion David Klingshelm of Liberty put an end to his run in Saturday's semifinals. Allen had the points advantage in the first round, but Klingshelm came back to pin him.

Allen started the season with a winning steak that hit double figures and finished the season by earning his place among the top wrestlers in the state.

"It's been a great season, but it's not over yet. I'll still do some freestyle wrestling," Allen said, outlining his own various tournament plans for the rest of the year.