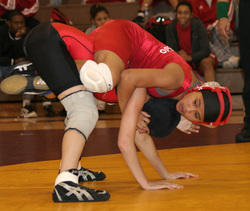 For the first time in the event's six-year history, the Vallejo High girls wrestling team did not host the California girls Invitational Wrestling Tournament, the sport's unofficial state championship. It didn't matter.

The Apaches won their second team title in as many years Saturday, distancing runner-up Terra Nova 124.5-82 in the Central Valley town of Hanford. Jennifer Fernandez, Lauren Knight and Monica Gonzalez each won individual weight-class titles, and Vallejo cemented itself as the premier girls wrestling program in the state.

"It's outstanding," head coach Mike Minahen said in a telephone interview from Hanford. "What a tribute to the girls that are so tough that they compete every day, wrestle hard every day with the girls and the boys in our mat room. It just means a lot to the whole program."

Fernandez was an underdog to take first at 98 pounds, but "pulled off one of the most amazing upsets I've ever seen," Minahen said.

Trailing Michelle Jimenez of Oak Grove (San Jose) 8-0 after one period, the sophomore came back over the next four minutes for a 12-8 win. This after Fernandez beat No. 2 seed Gabi Solis of Castro Valley to reach the final.

Knight pinned Hana Palamalu 3 minutes and 52 seconds into the 138-pound final. The senior finished the tournament 5-0 with pins in all five matches.

Gonzalez upset the fourth-ranked wrestler in the nation, Katrina Wilborn of Helix (San Diego) in the 156-pound final. Her 3-minute, 58-second pin was the third of the tournament for the sophomore.

Angie Miller (146 pounds) placed fourth for Vallejo, which became the first back-to-back champion in the event. Of the eight Apache competitors, a remarkable three return home with state titles.

Hogan head coach Ric Manibusan was far from disappointed with his squad's 74-point, fourth-place finish. Senior Jessica Ortiz (108) took second place after losing a tough 12-8 decision to Stephanie Lopez of West Covina in the final. It was only the second time Ortiz had lost to a girl this season.